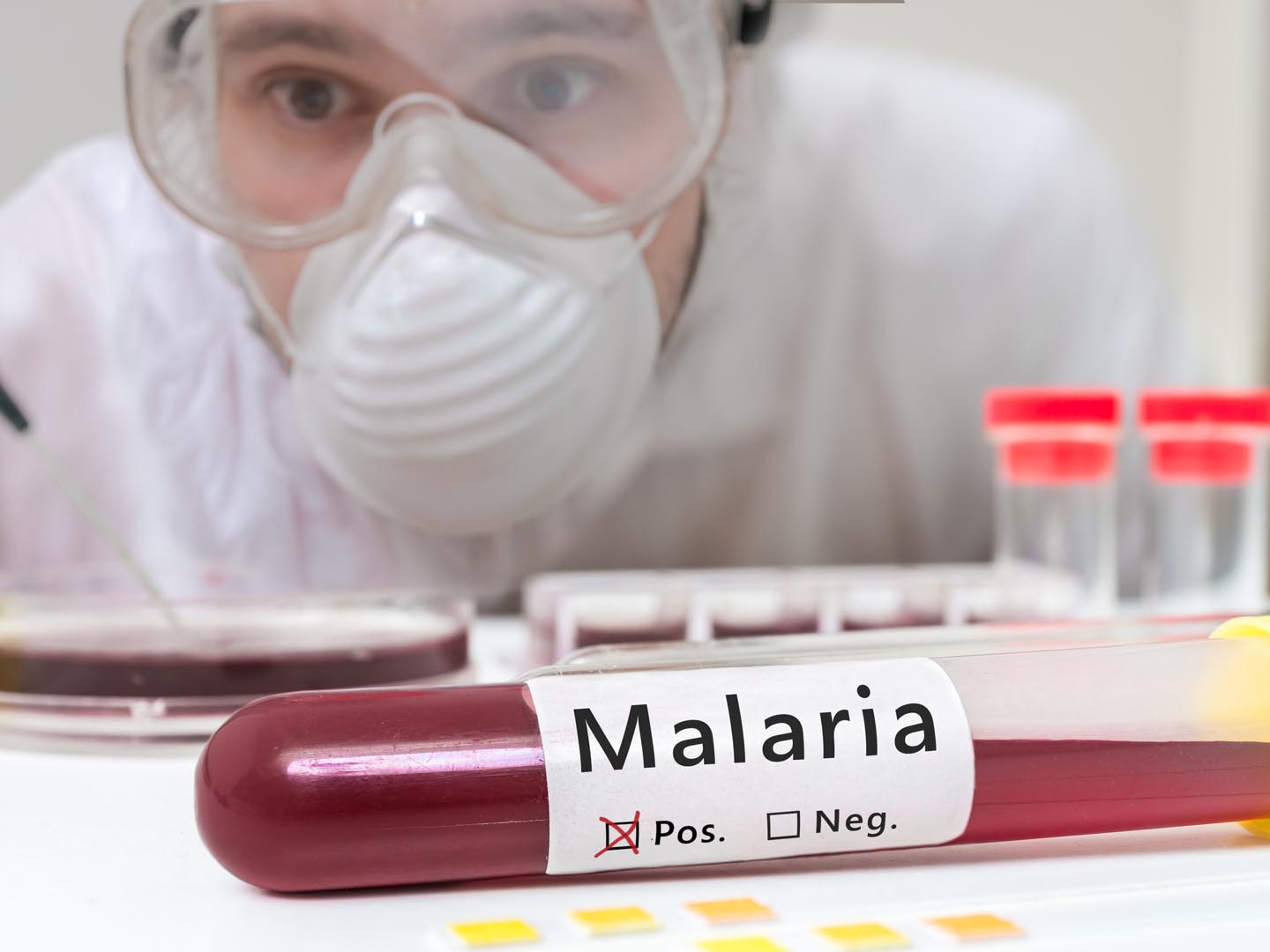 What is malaria?
Malaria is a dangerous and potentially life-threatening infection of red blood cells by a protozoan carried by mosquitoes. It occurs in some of the poorest areas of the world, namely parts of Africa, Asia, the Middle East, and Central and South America, where about forty percent of the world’s population live. Annually, 350 to 500 million cases of malaria occur worldwide with over a million deaths, mostly in children from sub-Saharan Africa. In 2002, malaria was the fourth leading cause of death in children in developing countries.

What are the symptoms of malaria?
Symptoms commonly present 10 to 15 days after exposure to the parasite from the bite of an infected mosquito, but some forms may not present for months or even years. Typically, signs of malaria mimic the flu with high fever, shaking chills and sweating, often presenting in a cycle which repeats every one to three days. Vomiting, diarrhea, headache, severe fatigue, and generalized body aches are also common. Because the disease affects red blood cells, anemia and jaundice (yellowing of the whites of the eyes and skin) may occur as red blood cells are destroyed. One species, Plasmodium falciparum, is of particular concern and can cause severe bleeding problems, kidney failure, neurological problems including seizures, altered mental status, coma, and even death.

What are the causes?
Malaria is spread by the bite of an infected female mosquito. Malaria is typically caused by one of four parasites in the Plasmodium familythat use mosquitoes as their vector of transmission. These four kinds of malaria include P. falciparum, P. vivax, P. malariae, and P. ovale. The most common are P. vivax and P. falciparum with the latter being the most serious. The disease can spread if an infected person (who has the parasite replicating in his or her blood) is bitten by a local mosquito, which then bites another person, thereby transmitting the disease. It is of special concern when a person who has traveled abroad and contracts malaria brings the disease back to a malaria-free country. Those living in malaria-free areas have little or no immunity to the parasite, making the disease particularly hard for the body to fight off. In addition, both patients and physicians in these areas may mistake malaria for a viral infection such as the flu, delaying proper diagnosis and increasing the severity of symptoms.

Local malarial transmission varies with patterns of rainfall, proximity of mosquito breeding sites (usually areas of stagnant water), and the type of mosquito that carries its parasite. Epidemics of malaria can occur not only in areas where people have little contact and low immunity, but also during emergencies or natural disasters when overcrowding, poor sanitation, and poor access to proper treatment leads to increased infection rates and complications.

Malaria can also be passed from a pregnant mother to her fetus, through transfusion of contaminated blood, or through sharing needles with an infected person.

What is the conventional treatment?
Because of the severity of malaria, if a person has traveled to an area where prevalence is high and is experiencing flu-like symptoms, the possibility of malaria should be seriously considered. A blood smear can determine if there are malaria parasites present. There are also rapid diagnostic tests available to provide results within minutes, however accuracy of the tests is questionable.

Identifying the species of infection is crucial, as the treatment, symptoms, complications and prognosis vary depending on the species involved.

Treatment is recommended to be started within 24 hours after symptoms appear. Several drugs are commonly used in the United States to treat malaria: chloroquine, sulfadoxine-pyrimethamine, mefloquine, atovaquone, atovaquone-proguanil, quinine, and doxycycline. A drug called primaquine helps to prevent relapses. These drugs are not benign. The side effects of chloroquine, one of the common anti-malarial drugs, can include nausea, vomiting, headache, dizziness, blurred vision and itching. In addition, it can worsen the symptoms of psoriasis and carries a risk of liver toxicity.

If the suspected parasite is P. falciparum (the most severe of the four), then the patient should be hospitalized as the treatment is often intravenous. Other factors to consider are the area where the person was infected, and if there is a large incidence of drug-resistance there. If the person is pregnant or allergic, those factors should be weighed carefully as well when choosing treatment options.

What therapies does Dr. Weil recommend for malaria?
Dr. Weil has spent many years traveling in malaria-prone areas of the world, and emphasizes that it is of utmost importance to take precautions against malaria if you are planning to visit such places. The first step is assessing the level of the threat, which can vary with the season. The Centers for Disease Control (CDC) website lists areas where malaria incidence is high. Also, learn about weather patterns in malaria-prone areas, and travel in the dry season, if possible, as mosquito populations will be lower.

If you cannot avoid locations with high risk, Dr. Weil suggests taking prophylactic medications such as chloroquine when going to an area where risk of malaria is significant.

Whenever you are outdoors in mosquito-infested areas, protect yourself with clothing that covers the arms and legs, and use an insect repellent. Sprays containing DEET (the acronym for N,N-Diethyl-meta-toluamide) are effective and have a “very low probability of toxicity in healthy adults” when used as directed, according to a federal report, but Dr. Weil recommends botanical-based alternatives. Among its recommended repellents, the CDC now lists oil of lemon eucalyptus, a plant-based product registered with the U.S. Environment Protection Agency (EPA). Registration indicates that the active ingredients in the repellent have been reviewed and approved for efficacy and human safety when used as recommended on the label. When oil of lemon eucalyptus was tested against mosquitoes found in the United States, it provided protection similar to repellents with low concentrations of DEET.

The other new repellent ingredient recommended by the CDC is picaridin, which is reputed to be as effective as DEET but is odorless and, reportedly, more pleasant to use. Picaridin has been widely used elsewhere in the world since 1998 and is recommended by the World Health Organization as the best protection against malaria. According to the EPA, picardin presents similarly low toxicity risks to those of DEET.

As an alternative to the synthetic repellents described above, and to oil of lemon eucalyptus if it is unavailable, Dr. Weil recommends the following natural products:

Here are his application recommendations:

Finally, it is a good idea to use a bed-net to sleep while traveling to high risk areas. Insecticide-treated mosquito nets, if used properly, are an excellent way to prevent mosquitoes from biting. The nets are pre-treated and can last from one to several years depending on what is applied to the material. Also, stay abreast of developments in research on a malaria vaccine – there are none currently available, but several formulations are being tested.