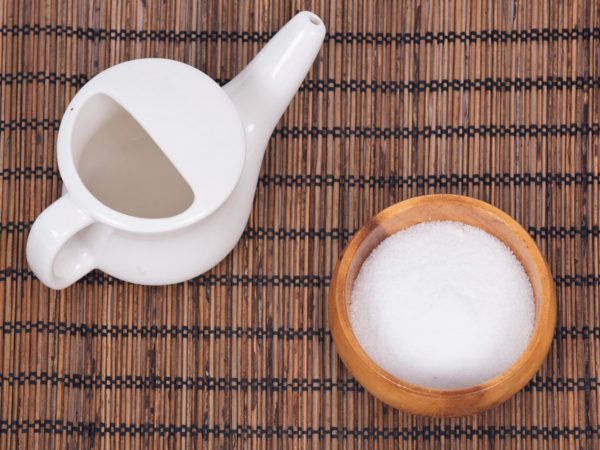 A neti pot is a small ceramic device with a spout that looks like a miniature Aladdin’s lamp. It is commonly used for rinsing the nasal passages with saltwater if you have sinus problems or pollen allergies.

In view of the very rare – but real – danger of encountering the Naegleria fowleri parasite, I recommend using purified or distilled water instead of tap water in a neti pot or for whatever method you use when rinsing your nasal passages. When inhaled, this ameba can cause primary amebic meningoencephalitis (PAM), an infection of the central nervous system that is almost always fatal. According to the U.S. Centers for Disease Control and Prevention (CDC) there have been 138 cases in the United States from 1962 through 2015. Only 3 people survived. (Note: You can’t get PAM from drinking water that harbors the ameba.)

N. fowleri usually is found in warm fresh water in lakes and rivers as well as hot springs, poorly maintained or minimally chlorinated swimming pools and geothermal well water. While it is most often found in lakes in the southern United States during the summer, the CDC reports that infections have recently occurred in northern states.

The risk of contracting PAM via use of neti pots came to light when two people in Louisiana died of the disease in 2011. An investigation found that the only way they could have inhaled the ameba was by using contaminated water in neti pots for regular sinus irrigation. Testing of the neti pots and water samples from both individuals’ households revealed the presence of the organism. The researchers who conducted the study said that for the purposes of nasal irrigation these findings demonstrate the importance of using water that is distilled, boiled (boil for one minute and cool; boil for three minutes at elevations above 6,500 feet) or filtered (with a filter labeled “NSF 53” or “NSF 58”). They reported that in the two Louisiana cases, the municipal water distribution systems serving both victims’ homes met U.S. Environmental Protection Agency regulations for treating drinking water. They also noted that while Naegleria fowleri can’t survive in salt water, the amount of salt dissolved in the tap water used in the neti pots was not enough to kill the ameba.

After the ameba enters the nose, it travels along the olfactory nerve to the brain. Symptoms develop one to seven days later: headache, fever, poor appetite, stiff neck, vomiting, altered mental status, seizures and coma. Death typically occurs about five days after the onset of symptoms.

There’s a lot about PAM we don’t know, including why some people are infected while swimming in warm, fresh water but others swimming with them are not. However, we do know enough to warn against the use of tap water for nasal irrigation.