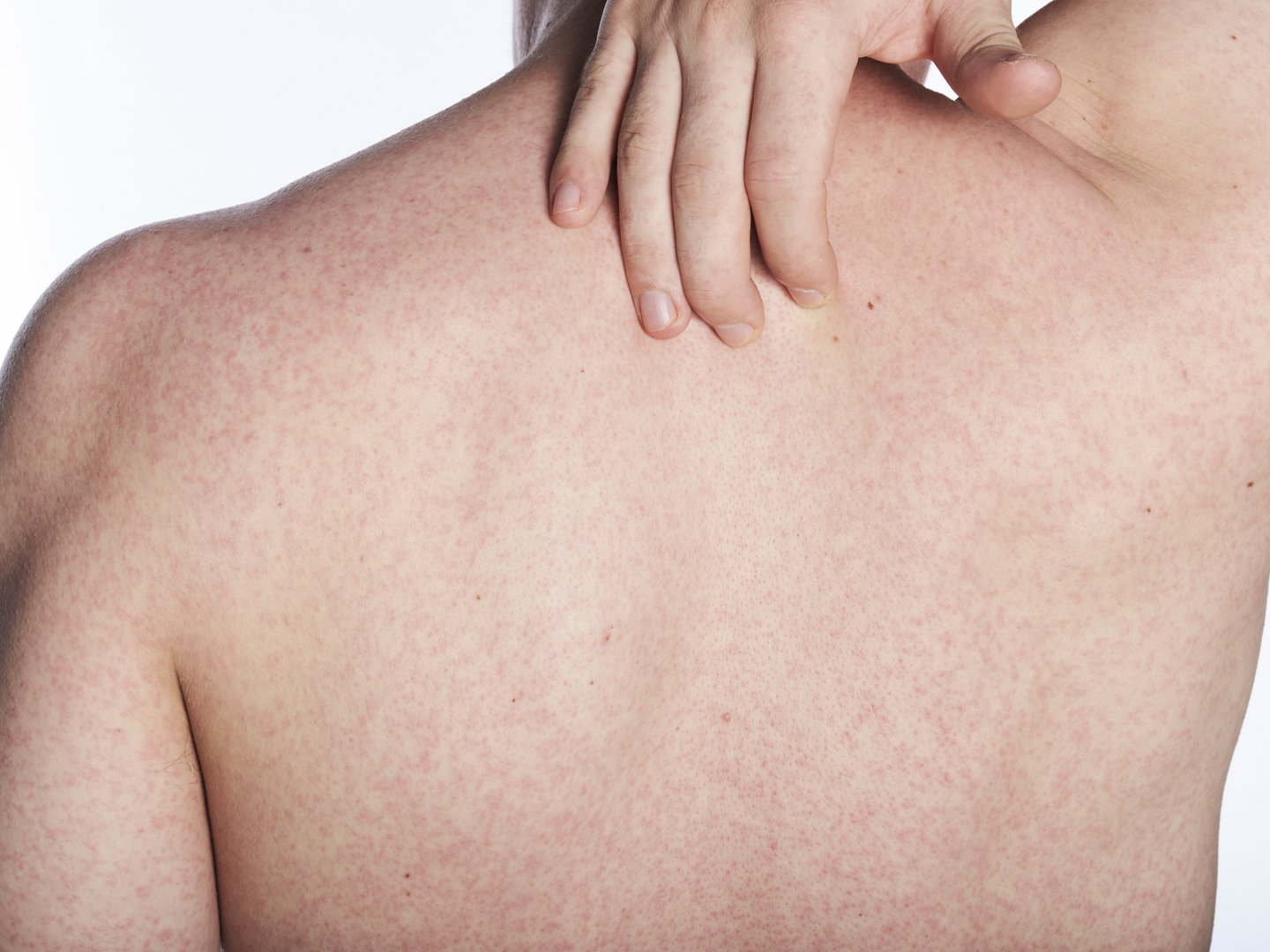 What is scarlet fever?
Scarlet fever, or scarlatina, is an illness causing a characteristic rash that covers most of the body, usually accompanied by a high fever. Scarlet fever is usually a complication following infection by a particular group of strep bacteria that cause strep throat. Consequently, one can have the typical symptoms of a strep throat infection in addition to rash and fever. Scarlet fever is most commonly seen in kids between the ages of 5 and 15, and rarely in adults. Scarlet fever was once considered a serious childhood illness due to the complications that come with it. The advent of antibiotics has made it a much less threatening condition, but still one that should be quickly diagnosed and treated.

What are the symptoms?
Common signs and symptoms of scarlet fever include a characteristic red, raised rash that feels like coarse sandpaper. Sore throat, enlarged, tender lymph nodes and fever in the absence of viral symptoms (cough and nasal congestion) usually appear first, with the rash coming a day later. Along with a sore throat, children often have a bright red tongue with white patches on the tongue and tonsils. The rash typically starts on the face, and then spreads to the chest, trunk and extremities. It does not include the palms of the hands or soles of the feet. The rash is often worse in skin folds around the groin, arms and legs. The rash usually lasts about a week and skin can slough off as the redness fades.

Scarlet fever and strep throat rarely result in serious complications when properly diagnosed and treated with antibiotics. It is very important to treat a strep infection within nine days, because in rare cases it can lead to an autoimmune reaction – rheumatic fever – that can affect the joints, skin, heart and kidneys. Rheumatic fever can cause permanent damage to the heart valves as well as other disorders of the heart. It can also lead to a syndrome called Sydenham’s chorea, which causes emotional instability, muscle weakness and jerky movements of the hands, feet and face. This autoimmune reaction can also cause inflammation of the kidneys, producing a condition called poststreptococcal glomerulonephritis that can lead to permanent kidney damage.

What are the causes?
Streptococcus pyogenes, otherwise known as group A beta-hemolytic streptococcus, causes scarlet fever as well as strep throat, pneumonia, toxic shock syndrome, and cellulitis, in addition to ear and sinus infections. The strain of bacteria causing scarlet fever releases toxins that produce the red rash, flushed face and “strawberry” tongue. The bacteria themselves spread through respiratory secretions from the mouth and nose. If an infected person coughs or sneezes, bacteria can become airborne as well as being transmitted on things the person touches such as glasses, eating utensils or a doorknob. If you have close contact with an infected person, you can inhale airborne bacteria or touch something a contagious person has come into contact with and then inoculate yourself by touching your own nose or mouth. Rarely, cases of scarlet fever can occur from strains of Strep pyogenes that cause infections other than strep throat.
Incubation period is typically two to four days, and if strep throat isn’t treated, a person can stay contagious for several days to weeks after the illness has passed. People can also be carriers of strep without being sick or demonstrating symptoms.

What is the conventional treatment?
Scarlet fever and strep throat should be treated with a course of antibiotics, usually penicillin or amoxicillin, which typically needs 10 days or so to be completed. If you are allergic to penicillin or resistance develops, a cephalosporin like Keflex (Cefalexin) or Ceclor (Cefaclor) can be given, as can Erythromycin. Other antibiotics may have a shorter course  –  between five and seven days. If adequately treated, patients will typically feel better within two days of taking the medication. One may be tempted to stop taking antibiotic therapy; however, it is essential to complete the full course of treatment prescribed by your doctor. Stopping medication early may cause the infection to come back or complications to occur. Patients who test positive for strep should complete at least 24 hours of antibiotic treatment before returning to work, school or childcare.

What therapies does Dr. Weil recommend?
Although prescription antibiotics are necessary and recommended to treat group A strep infections, keeping your immune system healthy is paramount, especially for those who tend to catch whatever ailment is going around.