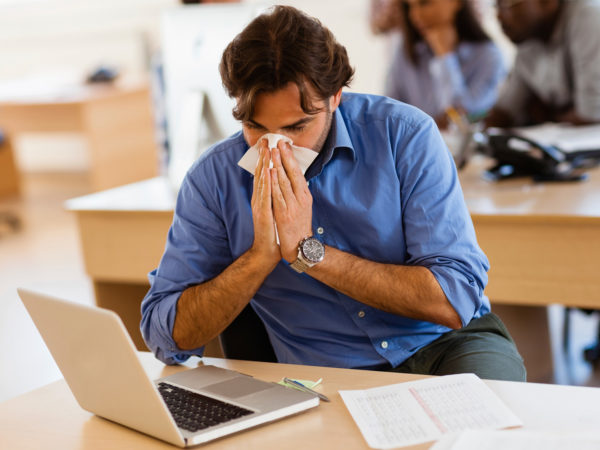 You’re right, and I think most of us would agree it’s unconscionable to expose those around you to illness. When it comes to actual practice, however, the people who go to work when they’re sick far outnumber those who opt to stay at home. A new survey from National Public Radio (NPR), the Robert Wood Johnson Foundation and the Harvard T.H. Chan School of Public Health found that 55 percent of working adults responded that they always go to work when they have a cold or flu, or do so “most of the time”. That includes 60 percent of those who work in medical jobs and 50 percent of restaurant workers.

Many people go to work sick because they won’t be paid if they don’t show up, according to a U.S. Centers for Disease Control and Prevention (CDC) questionnaire. Some do so because they’re afraid they’ll lose their jobs if they take time off. However, even people with jobs that allow paid sick days still go to work when they’re ill. (According to the NPR, Robert Wood Johnson, Harvard survey, 66 percent of full or part-time workers interviewed said their jobs offered paid sick leave). Another reason given for why workers don’t stay home when sick is because no replacement is available, and they don’t want to shift their workload onto their colleagues.

Whatever the reason, going to work when you’re sick is not a good idea, particularly for those who work in medical settings and restaurants. Handling food when you’re sick puts others at risk. The most common cause of foodborne illness is the norovirus, which is extremely contagious. Ingesting only a tiny amount of this virus – about 20 particles – is enough to make you sick. A person with this infection has about 70 billion viral particles per gram of stool. That’s enough to infect every man, woman and child in the world with plenty to spare. If infected restaurant workers don’t wash their hands thoroughly, the virus can contaminate food, plates, trays and any other object or surface touched.

The FDA has a “Food Code” that pertains to restaurant workers and stipulates that those who are sick should stay home until 24 hours after symptoms end, but this policy hasn’t been adopted in all states or enforced by all employers.

As for medical workers, many doctors, nurses and other health care personnel routinely go to work when they’re sick. A 2015 survey found that more than 95 percent of 536 medical personnel interviewed believed that they put patients at risk when they go to work sick, but 83 percent reported having done so during the previous year with diarrhea, fever, and respiratory symptoms. These practices put patients at risk, especially those who have cancer, have had organ transplants or are otherwise immunocompromised. Furthermore, sick health care personnel are unlikely to be at the top of their game.