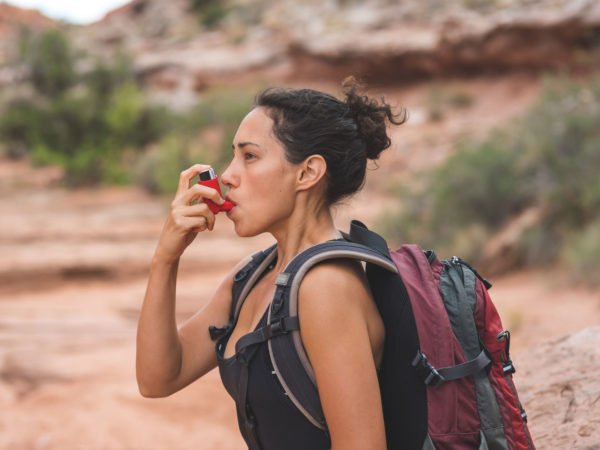 Asthma is an episodic constriction of the bronchial tubes. It is a common disorder of both children and adults, often regarded as mysterious and frustrating to treat.

What are some asthma symptoms?

Asthma symptoms can include wheezing (especially on expiration), coughing, and difficulty in breathing. Asthma can appear and disappear without warning. If an attack is severe enough, it can kill.

What are the causes of asthma?

The immediate cause of an asthmatic attack is tightening of the muscular bands that regulate the size of the bronchial tubes. These muscles are controlled by nerves, but what triggers the nerves to make airways constrict inappropriately is not clear. The triggers for asthma can be primarily allergic or primarily emotional or induced by exercise or respiratory infection, or it can occur with no obvious causes. It is now being considered an inflammatory disorder.

The “hygiene hypothesis” is a proposed explanation for why allergies and asthma are now epidemic, especially in developed countries. The hypothesis holds that children who grow up in crowded and dirtier environments are less likely to develop these ailments than youngsters raised in cleaner, more protected environments. The idea is that the developing immune systems of less privileged kids are exposed to lots of germs from an early age and so become stronger and more protective of health. The hypothesis recently got a big boost in credibility. Researchers at Duke University Medical Center compared the antibodies in the blood of laboratory rats and mice, which grow in a virtually germ-free environment, with those of wild rats and mice. All of the wild rodents had higher levels of IgG and IgE, classes of antibodies associated with immune and allergic diseases, but the wild rodents’ antibodies did not tend to bind to the rat’s own cells, as did the antibodies produced by the hygienically raised rodents. Instead, the wild rodents’ antibodies efficiently and effectively attacked invading organisms. The research was written up in the August, 2006, Scandinavian Journal of Immunology.

Despite this intriguing evidence, we need a lot more proof from human studies before the hygiene hypothesis makes the leap from theory to fact, and I wouldn’t worry about a home being “too clean.” In fact, random pollution of the home environment has its own drawbacks. Children who breathe secondhand smoke are more likely to develop asthma, and among all youngsters with asthma, those who breathe secondhand smoke have more frequent attacks).

What are the conventional asthma treatments?

Asthma treatment has two aspects: management of acute attacks and long-term control or prevention. Conventional treatments are sometimes the best choices for acute attacks, where immediate relief can be a life-and-death matter.

For allergic asthma, one of the safest and best drugs is inhaled cromolyn sodium. Most bronchodilating drugs are stimulants that increase sympathetic tone and anxiety. Theophylline, derived from tea, has a long history of use, but may not be as safe as doctors used to think. It can cause dramatic personality changes. Other drugs of this class can be inhaled to relieve and prevent attacks. These inhalers work, but they are often addictive, since the bronchial tubes are likely to become constricted again when one dose wears off (the same pattern occurs when these drugs are sprayed into the nose to relieve nasal congestion). Newer drugs – the leukotriene inhibitors are useful for some patients and less toxic.

Other inhalers contain steroids. If the steroids are not absorbed into the system, they can be safe and effective. Different products vary greatly in efficacy and absorbability. At this writing the best are Flovent (fluticasone) and Pulmocort (budesonide), both safer than older versions. Steroid inhalers should always be used immediately following inhalation of a bronchodilator.

In my view, conventional protocols for long-term control are more problematic. Oral steroids (prednisone is the commonest) are very dangerous for asthmatics, because it is too easy to become addicted to them, and toxicity from long-term steroid use is devastating. Try to avoid ever going on oral steroids. If you do have to take them, get off as soon as possible. In general, the less medication you can take, the better. Allopathic drugs, being suppressive in nature, tend to perpetuate asthma and may reduce the chance that it will disappear on its own.

What therapies for asthma does Dr. Weil recommend?

For acute attacks, this is one of the home remedies for asthma recommended by Dr. Weil: try lobelia, or Indian tobacco (Lobelia inflate). Mix three parts tincture of lobelia with one part tincture of capsicum (red pepper, cayenne pepper). Take twenty drops of the mixture in water at the start of an asthmatic attack. Repeat every thirty minutes for a total of three or four doses.

For long term control and prevention:

Here are some specific recommendations for exercise-induced asthma: