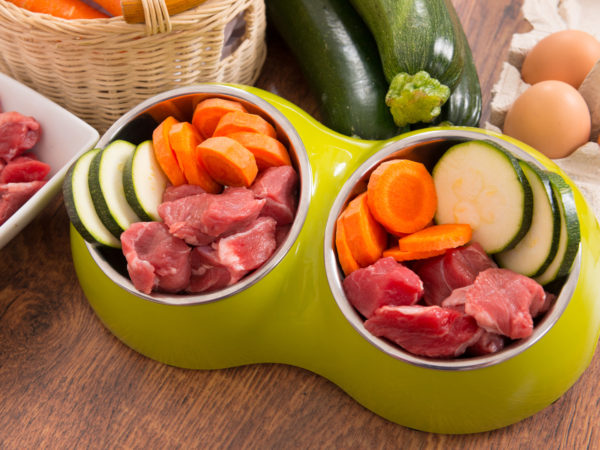 I’m not a proponent of raw food diets for companion animals. The raw food trend stems from the notion that in the wild, dogs and cats would eat what they catch – birds, rodents, snakes, insects – and their prey is obviously would not be heated or sanitized. Proponents maintain that raw meat is healthier for dogs and cats and improves their coats, body odor, teeth, and breath. There are plenty of anecdotal reports about miracle cures of diseases in pets switched to raw food, but I haven’t found any scientific studies documenting these claims.

The principle problem is that it has been at least 10,000 years since the ancestors of today’s domesticated dogs lived in the wild, and cats have been with humans for nearly as long. Consequently, dogs and cats have been dependent on humans for food for a very long time, and have probably evolved digestive tracts that reflect that dependence, including a preference for scraps from our tables. Throughout history, many of those scraps have come from cooked foods.

From what I’ve read, the pro-raw-food contingent downplays the risks of food-borne illnesses from raw meat; some maintain that dogs and cats aren’t as susceptible as humans to these problems. This view isn’t shared by most veterinarians.

Despite my reservations about a raw food diet, I’m afraid that most dogs and cats in the U.S. are being nutritionally short-changed. Many commercially produced pet foods don’t provide the high-quality protein dogs and cats need, often containing more grain than meat. Dog and cat digestive systems weren’t designed for a grain-based diet, cooked or not.

When choosing food for my own dogs, I now avoid anything containing grains as well as animal byproducts, rendered or recycled meats, poultry or fats. I currently feed my two Rhodesian ridgebacks, Ajax and Asha, a fish-based, grain-free product called Acana Pacifica from Champion Petfoods. They are thriving, and people who meet them often remark on how their coats gleam.

If you do decide to try feeding your pets a raw meat diet, ask your vet how much to feed each of your dogs or cats daily (amounts are based on the number of calories needed to maintain body weight). And when preparing their meals, be scrupulous about avoiding contamination: wash your hands after handling meat, clean surfaces that you’ve used for preparation, and make sure that the meat doesn’t remain out of the refrigerator for more than the time it takes to chop or grind it (and for your pet to consume it). Even if pets aren’t susceptible to common food borne illnesses, you are and so are your kids. Don’t leave uneaten food in your pets’ bowls for more than 10 to 15 minutes.