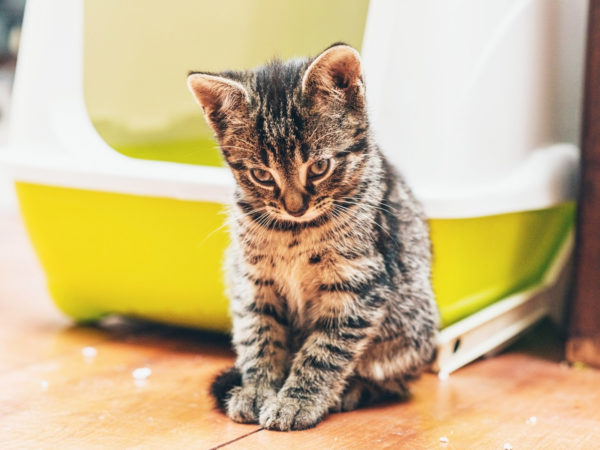 You raise an interesting question, but one to which there are no clear answers. I did a medical literature search to see if there were any studies linking inhalation of cat litter dust to any human health problems and found nothing. However, I did come across a controversy about this subject online – whether or not certain cat litters are harmful to humans or cats. The issue under popular debate is the effects of clumping litter – the kind that forms easily removable clumps when cats urinate in their boxes. As far as I can determine, this concern stems from a report by a cat breeder of the death of one or two litters of kittens that she attributed to internal blockages formed from litter dust the kittens inhaled in the box and licked from their fur when they groomed themselves. The litter ingredient blamed for this alleged effect is the clumping agent, sodium bentonite, used in most major brands of clumping clay cat litter. I did find a report published in 1996 in a veterinary journal about a cat that was brought to the vet with lethargy and muscle weakness on two occasions after ingesting litter containing bentonite.

Unfortunately, most reports on this subject are anecdotal. I’ve seen no studies suggesting that clay litters containing sodium bentonite put either cats or humans at increased risk of any health problems. Given the fact that the number of pet cats in the United States is upwards of 90 million, if litter dust were harmful, you would think that vets would have been seeing more sick cats with illness attributable to the dust and that the litter issue would have been scientifically investigated.

If you’re concerned about the dust thrown up by clay litters, you can switch to a litter made of wheat or corn – these contain no sodium bentonite. While they’re more expensive than clay litter, they last longer and have similar clumping properties. When disposing of used litter of any type, you can reduce your own exposure to dust by slipping the litter box into a large plastic bag before up-ending it. And since litter typically throws off dust when poured into the box, avert your head (or wear a mask) when filling the pan.