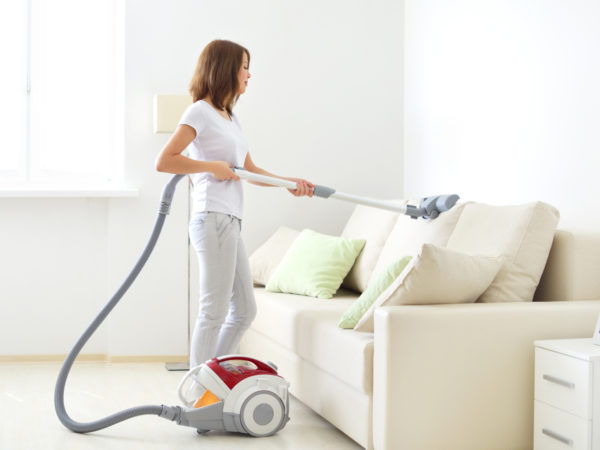 The first thing I would recommend is vacuuming. This will remove many of the flea eggs, larvae and insecticide – resistant pupae developing in your rugs, furniture and other surfaces. Concentrate on areas where your dog spends most of his time indoors but don’t forget hardwood and tile floors, and definitely use a good quality vacuum cleaner.

If you haven’t already, thoroughly wash any cushions in your dog’s bed (or have them dry cleaned). You might want to throw away old pet bedding and get a new dog bed after you’ve eliminated the fleas from the house. After vacuuming, seal the vacuum bag in a plastic garbage bag and throw it away outside. (You’ll have to vacuum frequently until the fleas are gone, and be vigilant about disposing the bag after each vacuuming.)

If you want to eliminate the fleas with natural products, try pyrethrins, the active insecticidal ingredients found in chrysanthemum flowers. These will kill the fleas and then degrade rapidly in the environment. They’re relatively nontoxic to humans (although they can aggravate asthma). You’ll need to use them or other treatments more than once in order to eliminate more than one generation of fleas. You also might try growth regulators such as fenoxycarb, which mimic flea hormones and prevent the young larvae from becoming adult fleas. In addition, natural enzymes such as those in “Flea ‘n Tick B Gone” can cause a mechanical disruption of the flea’s shells.

Another natural option is neem, a powerful and relatively safe insecticide obtained from a tree in India. To rid your household of fleas you also can use diatomaceous earth – the fossilized skeletons of one-celled sea algae often used by organic farmers to kill insects. Try sprinkling it on carpets, furniture and areas where fleas tend to hide. Its sharp crystals puncture insect bodies but are harmless to mammals.

Whichever product you use, follow the instructions on the package but be thorough and treat all carpets and throw rugs, including those under beds and in closets. Even with powerful chemical insecticides, you’ll probably see some fleas for two weeks or longer after spraying. Repeat the treatment if fleas aren’t gone within four weeks.

These measures usually work. If not, I’m afraid you’ll have to resort to a chemical “bomb.” Be sure that you, your family members and pets stay out of the house during the application of the insecticide and afterward until the substance dries. No matter what kind of pesticide you use to rid your house of fleas, be sure to vacuum repeatedly (and carefully throw away the bags) until you see (and feel) no signs of fleas and are sure that they’re gone.