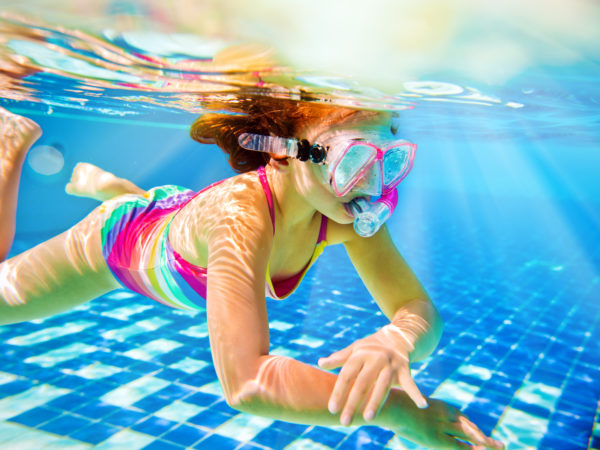 It is decidedly not a good idea to urinate in a pool. The chlorine (more about that below) does not “clean up” urine as many people, including Olympic gold medalist Michael Phelps and other competitive swimmers mistakenly believe. In fact, a recently published study found that chlorine reacts with urine to form two toxic compounds, cyanogen chloride (CNCI) and trichloramine (NCl3). CNCI can be harmful to internal organs including the lungs, heart and central nervous system, and NC13 is associated with acute lung injury.

The study looked at reactions between urine, sweat and chlorine (sweat contains a small amount of urine.) It showed that cyanogen chloride forms quickly in the presence of chlorine and (fortunately) decays quickly, too. However, before that happens, the reaction can deplete the chlorine in the pool and allow the newly formed compound to persist, causing trouble for swimmers.

There’s no doubt that the harmful compounds are ubiquitous in swimming pools. One of the authors of the new study was quoted in a news report as saying that he and his team have found the chemicals in every water sample they have taken from pools in the past 10 years. He added that on average a person leaves behind about 30 to 80 milliliters of urine (from urine itself or from sweat) every time he or she gets into a pool.

In fact, a study on this subject published in 2003 showed that the trichloramine released when chlorinated water reacts with urine, sweat or other organic matter from swimmers increased the risk of asthma in children who regularly swam in public pools. Trichloramine is believed to damage the cellular barrier that protects the lungs. Blood samples taken as part of the 2003 study showed elevated trichloramine levels, even in individuals who sat poolside but didn’t swim.

Bear in mind that chlorine itself is widely recognized as a health hazard. Research has shown that children who swim frequently in chlorinated pools may have increased risks of developing allergies or asthma. Among adults, exposure to chlorine in swimming pools has been linked with bladder and rectal cancer and, possibly, an increased risk for coronary heart disease.

I’ve long believed that inhaling chlorine fumes that accumulate above and around pools is unhealthy. Chlorine is a strong oxidizing agent and irritant, harmful to eyes and skin, the respiratory passages and lungs. There are safer, more modern disinfection methods available. I use a Sigma System silver-copper ion generator in my own pool. Chlorine-based disinfection of swimming pools is obsolete.

To protect yourself in chlorinated pools, consider wearing a mask and snorkel to shield your eyes, and after swimming, leave the pool area and inhale fresh air to flush the gas out of your system. Shower quickly and thoroughly to wash any residual chlorine off your skin.