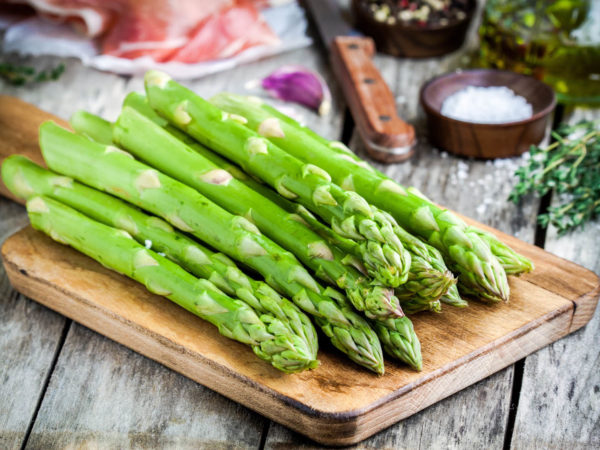 The odor you notice comes from the breakdown of sulfur compounds in asparagus. You can’t smell these compounds in raw or cooked asparagus, but after the body metabolizes them, some people notice an ammonia-like smell to their urine, usually within a half an hour. This phenomenon is very well known. French novelist Marcel Proust wrote in 1913 that asparagus "transforms my chamber-pot into a flask of perfume." And I’ve read that a British men’s club once posted a sign reading, "During the asparagus season, members are requested not to relieve themselves in the hat stand."

The issue of why some people notice the after-asparagus odor while others don’t has inspired at least 43 scientific studies going back to 1905. One of the latest studies on the subject comes from the Monell Chemical Senses Center in Philadelphia. It showed that some people do not produce urine with the after-asparagus smell, and that others can’t smell it even if they produce it.

The Monell researchers recruited 38 individuals to donate urine twice, once before and after eating roasted asparagus and again before and after eating bread. (To make sure that the subjects had a fully functioning sense of smell, the researchers tested their ability to smell a rose.) Using sensory testing techniques, the Monell researchers found that approximately eight percent of the participants didn’t produce the urine odor after eating asparagus and six percent were unable to smell the odor. One person who didn’t produce the odor was also unable to detect it. When the researchers looked at DNA samples from all the participants, they found that the inability to smell asparagus odor in urine is linked to a variation within a family of genes that regulate olfactory (smell) receptors. The lead researcher noted that this is one of only a few examples to date of a genetic difference in the human sense of smell.

There’s no way to prepare asparagus that can prevent the odor from developing. Focus instead on the fact that asparagus is a nutritional bonanza, providing more folic acid than any other vegetable – a 5.3-ounce serving gives you 60 percent of the recommended daily allowance. Asparagus is low in calories (less than four per spear), has very little sodium, and is a good source of potassium, thiamin and vitamin B6. It is also a great source of fiber, with three grams per 5.3-ounce serving. Asparagus also contains glutathione (GSH), a potent antioxidant and cancer fighter.

On top of all that, it is delicious and easy to prepare. As early as 200 B.C., the Romans grew asparagus and froze the spears in snow in the Alps until it was time to bring them back to Rome for the Feast of Epicurus. Even in those days, they knew how to cook it: Emperor Caesar Augustus described "haste" as being "quicker than you can cook asparagus." He was right – asparagus doesn’t take much cooking when dropped in boiling, salted water. Test it with a small sharp knife when it has been in the water for a minute or so – if the knife penetrates a spear easily, the asparagus will be crisp-tender. You can also add sliced asparagus to stir-frys or munch on it raw.