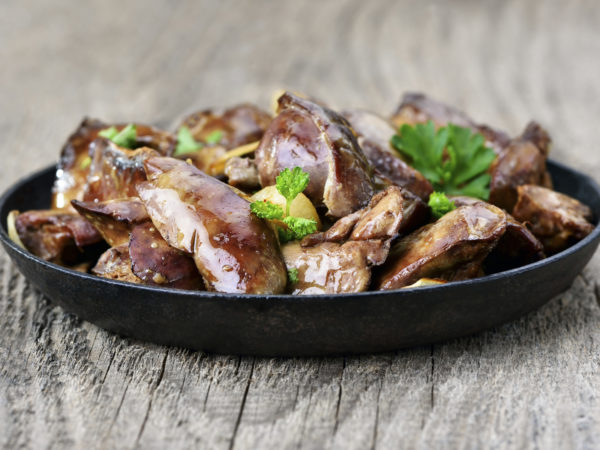 Organ meats have never been as popular in the United States as they are elsewhere in the world. But foie gras (from duck or goose liver) is now a staple of fine dining in many parts of America. You are also likely to see liver (especially as pâté) on the menus of French restaurants and find chopped chicken liver in most Jewish delicatessens. While researching your question, I checked a popular food site and saw 147 recipes listed for chicken livers, combined with everything from bacon and onions to mushrooms and rice, so I assume that organ meats aren’t as unusual or off-putting in the U.S. as some might think. On that same site, I also found recipes for scrambled pork brains, sheep’s head broth and steak-and-kidney pie (a British comfort food,) but not surprisingly, there were relatively few recipes for these ingredients.

That said, organ meats have been used for thousands of years in cultures that traditionally wasted no edible part of a slaughtered animal. These parts are classed as “offal” (pronounced “awful”). The term is said to be a contraction of Old English from “off” and “fall,” the pieces that fall off animals during butchering. Whether you eat them or not probably has more to do with personal taste and cultural conditioning than the nutritional value of organ meats.

It is true that liver is packed with vitamins. A four-ounce portion of calves’ liver gives you more than 1,600 percent of the daily value of vitamin A and hundreds of times the daily values of vitamins B12 and B2 (riboflavin) as well as lots of iron, zinc, folate and other essential nutrients.

One often-cited downside is that liver and other organ meats are high in saturated fat and cholesterol. However, recent research suggests that there is no significant evidence that dietary saturated fat is associated with an increased risk of coronary artery disease. And the relationship between dietary cholesterol and increased heart disease risk is complex. A 2005 study from the University of Washington stated that the association “is, if anything, minor in nature” but there may be an elevated risk for “responders,” that is, the minority of people whose blood cholesterol rises significantly in response to dietary cholesterol. If you’re on a cholesterol-lowering diet, the American Heart Association recommends eating organ meats only occasionally.

Another potential concern is contamination, particularly as it relates to liver. In animals, as in humans, the liver is the primary organ for removing toxins from the blood. However, this does not necessarily mean the liver accumulates more toxins than other tissues (the liver may simply aid in separating toxins so they can be excreted). A 2004 study by Pakistani researchers revealed that liver, kidney and lean meat from cattle, chickens and sheep accumulated varying amounts of heavy metals. Beef liver contained more arsenic than lean meat (52 ppm vs. 46 ppm), but less mercury (31.47 ppm vs. 62.39 ppm).  On the other hand, other studies have indeed found higher heavy metal accumulations in the organs of farm animals grazed near metalworking plants in the Slovak Republic. Bottom line: don’t eat any meat – organ or otherwise – from animals raised in toxic environments.

If you enjoy eating liver and are unsure about its source, I recommend choosing calves’ liver over beef liver, because there are likely to be fewer toxins in the livers of younger animals. I would also urge you to choose liver from organically raised animals so there is less chance that pesticides, hormones or antibiotic residues will be present.

In the wake of mad cow disease, I advise against eating brains from cows or other animals. Pork brains are a staple in stir-fries in China and Korea. I’ve read that in the U.S. canned pork brains are a popular item in the south, but I haven’t noticed that they’re catching on nationwide.

If you enjoy eating certain organ meats, it’s probably OK to indulge in them prudently and occasionally. But there’s no compelling health reason to include them in your diet if you don’t like them.