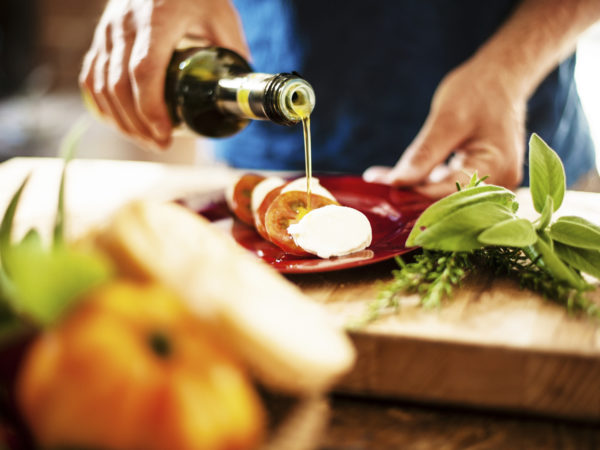 It appears to be true. New research suggests that extra-virgin olive oil contains a compound called oleocanthal that acts in the same way ibuprofen does to relieve pain. Scientists at the Monell Chemical Senses Center in Philadelphia reported in the August 31, 2005 issue of the journal Nature that oleocanthal acts as a natural anti-inflammatory by inhibiting COX-2 enzymes in the same way ibuprofen does. COX-2 enzymes take part in the process of joint inflammation that can lead to arthritis pain.

Unfortunately, this doesn’t mean you can treat pain by eating a salad with dressing made from olive oil or even by dipping bread into a pool of extra-virgin oil. The investigators reported that a 50-gram dose of olive oil (just under two ounces) would have only 10 percent of the pain relieving power of an adult dose of ibuprofen – that’s a lot of olive oil (and calories). However, the researchers also say it is possible that regular consumption of olive oil might provide some long-term health benefits because of COX-2 inhibition. Ibuprofen appears to reduce the risk of some types of cancer and, possibly, Alzheimer’s disease, and aspirin, another COX-2 inhibitor, protects the heart.

Not all olive oils contain oleocanthal. You can tell if yours does with a simple taste test. If the oil triggers a stinging or irritating sensation in the throat when you swallow, oleocanthal is present. Olive oil tasters describe this quality as “peppery.” The Monell researchers said that extra-virgin olive oil from Tuscany is high in oleocanthal and that some California olive oils are also good sources.