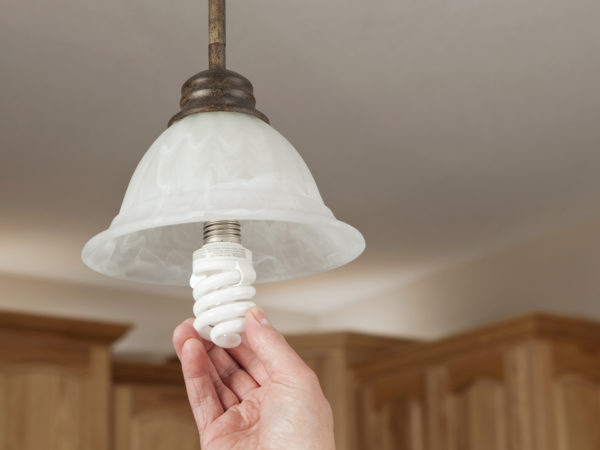 Energy Star is a U.S. government designation for compact fluorescent lamps (CFLs) that use 75 percent less energy than standard light bulbs. According to government projections, if every U.S. home replaced just one regular light bulb with an Energy Star bulb, the energy savings would be enough to light more than three million homes for a year, reduce annual energy costs by $600 million, and prevent greenhouse gases equivalent to the emissions of more than 800,000 cars.

The CFLs last 10 times longer than standard bulbs and, again according to government figures, each one will save $30 or more in electricity costs over its lifetime.

All this adds up to a worthy individual contribution to saving energy and reducing greenhouse gases, but there is concern about how to dispose of them so that the mercury they contain doesn’t end up in landfills. The danger is when bulbs break, vaporous methyl-mercury can enter the food chain. In addition, bulb breakage in containers and sanitation trucks can expose workers to high levels of mercury.

The solution appears to be recycling, but here, too, there are problems related both to cost and to the mercury content of the bulbs. First of all, very few recycling programs are in place. Secondly, the breakage problems and potential for worker exposure are the same as they would be for bulbs tossed in the trash. Consider, the EPA’s instructions for dealing with a broken bulb at home:

So far, bulb recycling options are limited. One retailer, IKEA has instituted a recycling program, and in June 2007 Wal-Mart launched a limited collection effort in five states. Some municipalities and counties have banned disposing of CFLs in the trash, but few government recycling programs are in place. The EPA is urging retailers who sell the bulbs to help with recycling.

Given the danger mercury can pose to health, disposing of CFLs requires care. Check with both retailers who sell the bulbs and with local government officials about how and where to recycle them.