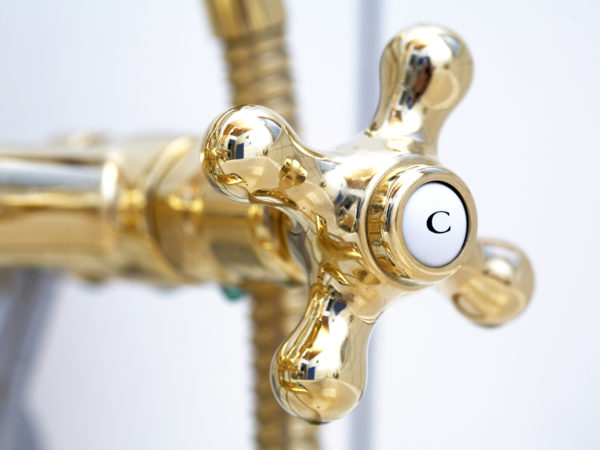 You win this one. You should never use hot water from the tap for drinking or cooking, and especially not for preparing baby formula. The main reason is that hot water is more likely to be contaminated by lead from pipes than cold water. Hot water can dissolve lead from corrosion in the pipes or from lead solder used in copper pipes more quickly than cold water. According to the Environmental Protection Agency (EPA) most of the lead in household water comes from residential plumbing, not from the local water supply.

If your friend has children, she should know that lead poisoning is a serious child health issue. Lead in the body can cause mental retardation, and even low levels can slow a young child’s development and cause learning and behavior problems. In order to reduce the amount of lead in your household water supply, be sure to flush your cold water pipes whenever a faucet hasn’t been used for six hours or longer. The more time water has been sitting in the pipes, the more lead it may contain.

Even if your copper pipes were joined with lead-free solder, lead can leach from new brass faucets and fittings, according to the EPA. And lead is not the only concern here. Water sitting in hot water tanks is likely to contain other contaminants as well. And hot water dissolves more substances than cold. The EPA advises running the water until it becomes as cold as it will get before drinking it or using it in food. I recommend letting it run for three to five minutes.

I also advise having your water tested. Use an independent lab, not the free testing offered by companies selling water purifiers – it’s not thorough enough. In addition to detecting the presence of lead, tests can reveal such contaminants as fecal coliform bacteria, fluoride, chlorine, arsenic, and nitrates, as well as parasites, other microorganisms, sulfates, herbicides, and pesticides. As far as lead is concerned, the EPA says that testing is especially important for residents of high-rise apartment buildings with lead-soldered central piping.