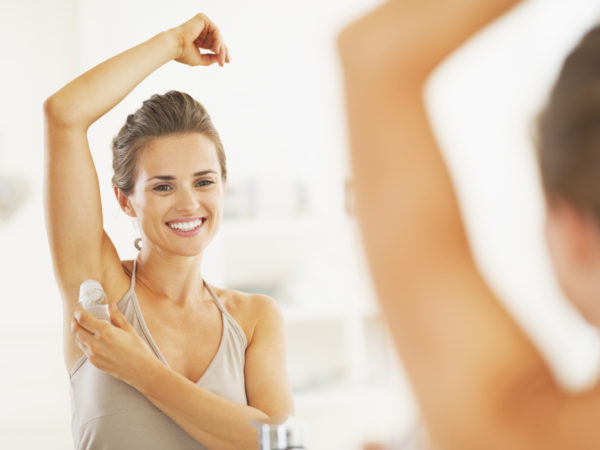 You are likely referring to the findings of a study in the UK on the use of deodorant by people who have a gene that prevents them from producing underarm odor. Researchers found that about two percent of the 6,495 women who participated in the study carry a rare version of a gene (ABCC11) that blocks underarm odor. Body odor is genetically determined and specific to an individual. (This allows bloodhounds to track humans.) More often, however, the term is used to refer to the unpleasant scent that can develop when bacteria break down perspiration (which is virtually odorless by itself).

The British researchers found that 78 percent of the people in their study who were identified as non-producers of body odor use deodorant most of the time anyway while about 20 percent do not. The lead author suggested that those who don’t produce body odor and do not use deodorant must consciously or subconsciously realize that their perspiration doesn’t smell. He attributed the high percentage of non-producers who do use deodorants to adherence to sociocultural norms. (This is in contrast with Northeast Asia, where most people do not need deodorant and don’t use it).

The investigators noted that people who carry this rare genetic variant are also more likely to have dry (rather than sticky) ear wax, which could be a good indication of whether or not you produce underarm odor. They suggested that a simple gene test might alert those who carry the genetic variant so they can avoid the unnecessary expense and chemical exposure of deodorant products.

To reduce body odor naturally, I recommend avoiding caffeine, which increases activity of apocrine sweat glands (those most likely to cause it). You can also splash rubbing alcohol in the armpits to reduce bacteria on the skin and look for deodorants in natural foods stores that contain extracts of green tea, which is a safe, natural antibacterial. I would avoid “natural crystal” deodorants that contain aluminum, which can be irritating or harmful.

While we’re on this subject, a persistent Internet hoax warns that antiperspirants and many deodorants contain substances that can cause cancer when absorbed through the skin or get into the body through nicks caused by shaving. I’ve seen no scientific evidence to support this idea. A study published in the October 16, 2002 issue of the Journal of the National Cancer Institute found no increased breast cancer risk among women who reported using underarm deodorants or antiperspirants, those who used these products after shaving with a blade razor, or in those who used the products within one hour after shaving with a blade razor. Other studies have reported similar results.