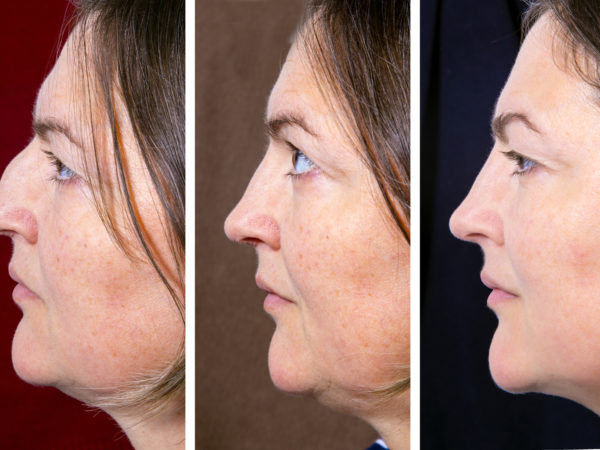 A drug that can help reduce the fat that constitutes a double chin is being tested in clinical trials in the United States and abroad. Reportedly, results so far look pretty good, but more research will be needed before it becomes available. The drug, sodium deoxycholate, is one of two compounds that were used previously in a fat-dissolving drug combination, Lipodissolve, the so-called “lunch-time lipo” injection promoted to decrease fat. That particular duo prompted a warning from the Food and Drug Administration (FDA) in 2010 about side effects that included permanent scarring, skin deformities and painful knots under the skin. The FDA had not evaluated or approved either of the two drugs used.

At present, the only way to get rid of a double chin is to have the fat removed via traditional liposuction. The drug being studied for safety and effectiveness in clinical trials is now known as ATX-101 and must be given by injection. According to a report on one of the studies presented at the 2013 meeting of the American Academy of Dermatology, the drug, a synthetically-derived bile acid, works by prompting fat cells to rupture, destroying them. The ruptured cells are then removed by macrophages, a type of white blood cell.

Studies are ongoing at 21 sites in the United States with 165 patients who had what the researchers described as “moderate submental fat” (the medical term for double chin). Overall, more than 2,500 patients around the world have been enrolled in studies of ATX-101. Reportedly, 1500 of them have been injected with the drug, while 1,000 have received a placebo. In the U.S. trial, 78 percent of the patients were women with stable weight and a mean age of 47; none of them had previous treatments to reduce or eliminate a double chin. The drug was injected up to six times at 28-day intervals, but the dosage can be tapered off as the double chin shrinks, lead researcher Susan Weinkle, M.D., a dermatologist in Bradenton, Fla., told a meeting of the American Academy of Dermatology (AAD) in March 2013.

In an interim analysis three months after the last injection, researchers reported more than a one-point improvement on a submental fat rating scale in 86.8 percent of all cases. As for the patients, 87.6 percent reported being at least “slightly satisfied” with the way their faces and chins looked, and 96.6 percent said that they saw improvements in chin and neck definition after treatment. Dr. Weinkle reported to the AAD that most of the patients said that they felt less self-conscious and younger, and many said they looked as if they had lost weight, even though they hadn’t.

The side effects reported in the U.S. trial were described as “mild-to-moderate” and temporary. A total of 91.5 percent of the patients reported some type of problem, most often bruising, numbness, pain and swelling at the injection site. No changes were seen in blood fats, which were checked after each session; no systemic effects and none of the side effects attributed to Lipodissolve were reported. A European ATX-101 trial with 723 patients also led to significant improvements, according to a report presented in February 2013 at a medical conference in Paris.

I wouldn’t get too excited yet about this potential option to address double chins. The findings must be considered preliminary until the studies are completed and the results are published in a peer-reviewed medical journal.