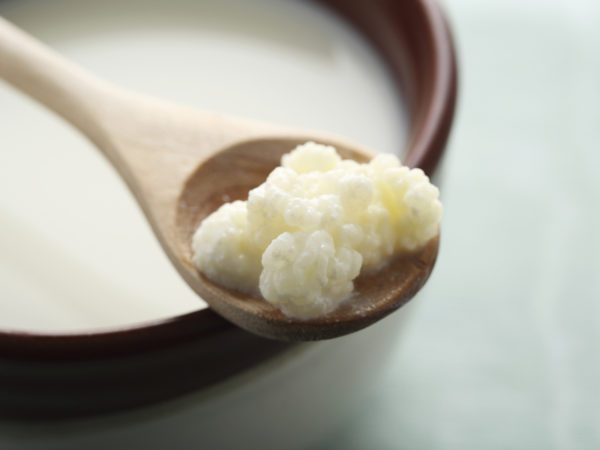 Kefir, an ancient drink from the Caucasus Mountains that resembles liquid yogurt, is made by adding a live culture – called kefir “grains” – from a previous batch of kefir to room-temperature milk (usually from a cow, goat or sheep, though soymilk can be used). The cultures are a combination of bacteria and yeasts, usually lactobacillus acidophilus and Saccharomyces kefir.

Traditional kefir is tart – even sour – and contains a bit of carbonation and some alcohol from the fermentation. However, much of the kefir sold commercially in the United States is neither carbonated nor alcoholic.

I think kefir is great. It is a probiotic, which means it contains “friendly” bacteria that can stabilize the digestive tract, and when it is well made, it is delicious. Kefir also provides you with calcium and protein, and may have some additional benefits for the immune system. You can certainly use it every day. A small study published in the May, 2003, Journal of the American Dietetic Association showed that drinking kefir eliminated – or, at least, dramatically reduced – symptoms of lactose intolerance in 15 adult participants. Researchers at Ohio State University tested plain kefir, raspberry-flavored kefir, plain yogurt, raspberry-flavored yogurt and two-percent milk in this group after a 12-hour fast. The participants recorded any symptoms of lactose intolerance after consuming each food. They reported few or no symptoms after ingesting both types of kefir and both types of yogurt.

The researcher who conducted the study, Steven Hertzler, an assistant professor of medical dietetics at Ohio State University, said that kefir might be a better option than yogurt for some lactose-intolerant people because it contains a wider array of microorganisms believed to break down lactose in the digestive tract. In addition, Hertzler suggested that kefir microorganisms may be able to colonize the intestines and protect against disease-causing bacteria.

The one caution I would give you is that commercial kefir often is overly sweetened and full of additives. Read labels carefully. I would buy plain varieties and add your own sweetener and flavoring if you like. And making your own kefir isn’t difficult, with starter kits widely available. You’ll have to experiment a bit to produce kefir that bests suits your taste. In general, the longer the fermentation time, the more sour the finished product. Enjoy!