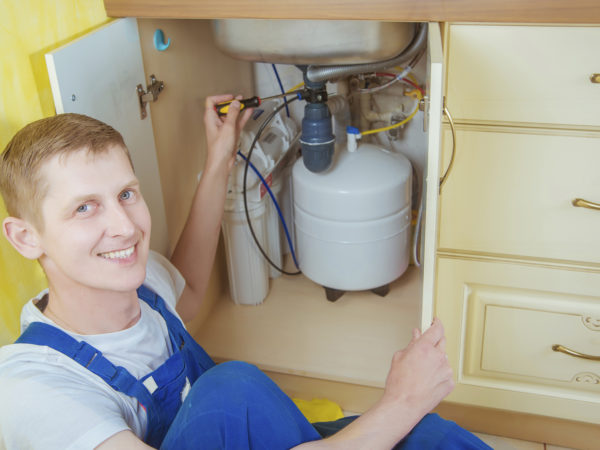 Chloramine is a chemical compound made by reacting ammonia with the active ingredient in chlorine bleach. Although it is a weaker germicide than chlorine, it is more stable, which is why water systems are making more use of it.

According to the Environmental Protection Agency, chloramine provides better protection against bacterial regrowth in water systems with large storage tanks and dead-end water mains. The EPA says that like chlorine, chloramine effectively controls biofilm, a slime formed by bacterial growth that coats and corrodes pipes and can harbor dangerous concentrations of coliform bacteria. Because chloramine tends not to react with organic compounds in water, consumers may have fewer complaints about the chemical taste and odor of treated water.

Like chlorine, however, chloramine is toxic. The EPA states that neither poses health concerns to humans at the levels used for drinking water disinfection, but even at those levels, both can harm fish and amphibians. Chlorine produces by-products that contribute to cancer and birth defects and, in itself, may contribute to heart disease, but at least it dissipates rapidly when water is boiled or left standing and exposed to air. Chloramine does not. So, if you have an aquarium and your water is disinfected with chloramines, you’ll have to treat it with a dechlorinator, available at pet shops, to prevent the water from killing your fish, and think about whether you want to drink water that can kill marine animals.

If you’re concerned about chloramine and other toxins in your water, I recommend having your water tested (this will probably cost more than $100) to see JUST what it contains. The test results can help you decide whether you need a filter and what kind would be best.

In my home and offices I use a distiller unit called the PW4HD3 (PureWater4Health.com, 520-303-1646) that can be mounted under the sink, works silently, produces cool water (some distillation systems produce hot water when the unit is replenishing its storage reserve), and is self-sterilizing. This unit comes with a built-in pump, automatic drain, and all the hoses, fixtures, and “extras” that end up adding to the price of other purification systems.

Although the system is expensive (more than $2,000, installed), the cost works out over time to be much less than that of bottled water. I’ve always thought distillation was the best water purification method and that distilled water is best for drinking.