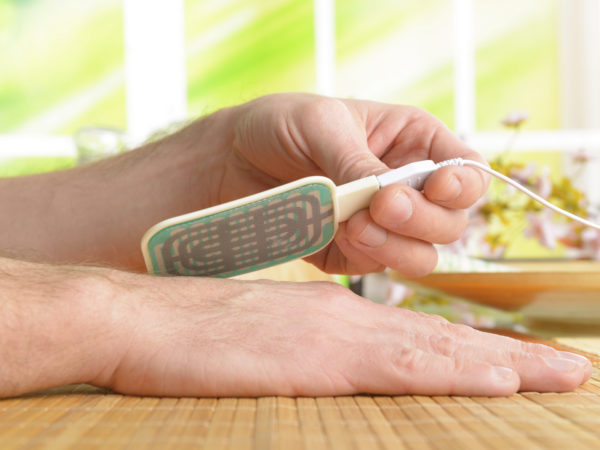 Bioresonance therapy is also called electrodermal testing, bio-physical information therapy, BIT, bio-energetic therapy, energy medicine and vibrational medicine. Whatever the name, the method is based on the notion that electromagnetic oscillations emitted by diseased organs and cancer cells are different from those emitted by healthy cells. It is promoted for the diagnosis of allergies, asthma, atopic dermatitis (eczema), and for treatment of cancer and rheumatoid arthritis.

The electromagnetic differences are supposedly detected by an electrical device, which is said to determine which organs are involved and be able to “cancel out” unhealthy signals. Beyond that, treatment may involve removing and replacing dental fillings (amalgams), which are said to carry currents that “alter the body’s electromagnetic circulatory system” in undesirable ways.

No evidence supports any of these claims. In fact, the little scientific evidence that does exist refutes them. In a randomized, double-blind trial of bioresonance for treatment of atopic dermatitis in children at Alpine Children’s Hospital at Davos, Switzerland, researchers found the method to be ineffective. Another trial compared the efficacy of electrodermal testing to the standard skin-prick test for allergies to house dust mites or cat dander and found no correlation between the electrodermal testing results and those from the skin-prick method. In addition, a British clinical trial to evaluate electrodermal testing for allergy diagnosis also found it to be unreliable. The findings were published in the British Medical Journal on January 20, 2001.

So far, no clinical trials have looked at bioresonance therapy for cancer, but I can tell you that there is no validity to claims that the devices can kill tumor cells by releasing “suppressed” tumor suppressor genes. In fact, the genes in question aren’t suppressed at all – they have mutated and can no longer carry out their normal functions of monitoring cell division and causing defective cells to self-destruct. Once mutated, these cells can’t be restored to normal activity.

In short, bioresonance therapy has no scientific validity. Avoid it.