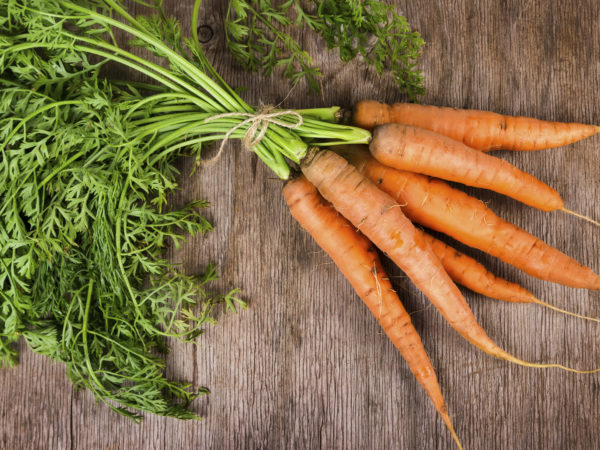 No. The warning you received is an Internet hoax that has been circulating for a few years. First, a definition: when we speak of baby carrots, we’re referring to those uniformly short pieces of carrot packaged in plastic bags. They’re not true “baby” (immature) carrots, which are sometimes sold with some of their greens attached to show that they’re the real deal. In reality, they are actually cut and shaped pieces of large carrots.

Baby carrots were introduced in the 1980s by a California farmer who wanted to salvage twisted and knobby carrots that were being thrown away as too unattractive to sell. Misshapen carrots can amount to as much as a third of a farmer’s crop; discarding them represents a significant loss. At first, baby carrots were cut and sliced by machine from the otherwise unsalable carrots, but today, they come from carrots specially bred for sweetness and uniform orange color.

It is true that these cut-and-shaped carrots are rinsed in a chlorine wash to eliminate bacteria (including E. coli and Salmonella) that can cause food-borne illnesses. Afterward, they’re rinsed again with potable water to remove the chlorine. Most other pre-cut vegetables and fruit are treated the same way. If the e-mail warning you received said that the white film that develops on stored baby carrots is the “chlorine rising to the surface,” that’s not true either. The film is a result of the dehydration of the cut carrots – you would see the same thing if you cut a regular carrot and stored it in the refrigerator.

I’m not a fan of baby carrots because I don’t like their taste. I prefer organic whole carrots. But there’s no health reason to avoid baby carrots if you like them. Look for organic ones. To give them their due, since baby carrots were introduced, carrot consumption in the U.S. has increased 33 percent.