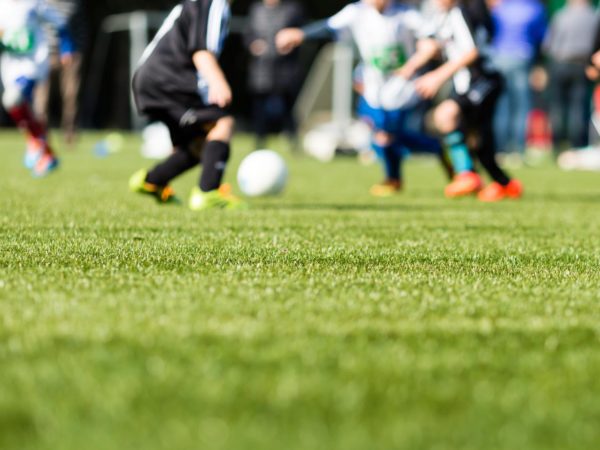 You pose a question for which there are no easy answers. Artificial turf, which is reportedly in use in more than 11,000 playing fields and playgrounds in the U.S. consists of synthetic grass anchored in crumb rubber pellets made from recycled tires. The upside of this innovation is easy maintenance, whether the fake turf is used in place of lawns or grassy athletic fields. It requires no mowing, weeding or watering. Beyond that, according to the Synthetic Turf Council, an industry trade group, use of crumb rubber has kept more than 105 million used tires out of landfills, resulted in the conservation of more than 3 billion gallons of water, reduced smog emissions and eliminated nearly a billion pounds of harmful fertilizers and pesticides.

The downside of synthetic turf is the health risks the chemicals in crumb rubber may pose to kids (and adults) who play sports on the stuff and come into contact with tiny pellets of crumb rubber that are kicked up into visible black clouds by feet and bouncing balls. The pellets get stuck in clothes, shoes, hair and mouths.

In 2009, the U.S. Environmental Protection Agency (EPA) published a report on an investigation of the potential hazards of artificial turf carried out in 2008. The EPA characterized its findings as “limited”, partly because it was unable to gain access to and take samples from some fields, and partly because of the “wide diversity” of crumb rubber material used. A single field can contain rubber from tens of thousands of tires from different manufacturers, containing a mix of chemicals that can include arsenic and benzene, both known carcinogens, mercury, polycyclic aromatic hydrocarbons plus heavy metals. The crumb rubber in some fields installed prior to 2009 may contain lead, which is unsafe for kids in any amount.

Notwithstanding the acknowledged limitations of its study, the EPA concluded that concentrations of the crumb rubber components monitored were “below levels of concern.” Since then, the EPA has said that more studies are needed but told NBC News that it does not anticipate performing any because it regards the crumb rubber issue as a state and local concern.

One notable catalyst for growing parental worries about the use and potential dangers posed by crumb rubber was a list compiled by University of Washington assistant women’s soccer coach Amy Griffin of goalies who developed cancer, mostly forms of lymphoma or leukemia. The list contains the names of 79 goalies plus 59 other athletes nationwide who have been diagnosed with cancer. Griffin acknowledges that her list isn’t a scientific study but notes that as goalies repeatedly dive for balls during play and practice they come into skin contact with crumb rubber more often than their teammates.

Clearly, we need to know more about the hazards that may be posed by the widespread use of synthetic turf. As things now stand we have no clue about possible long-term effects on health or whether low exposure can affect children’s development.