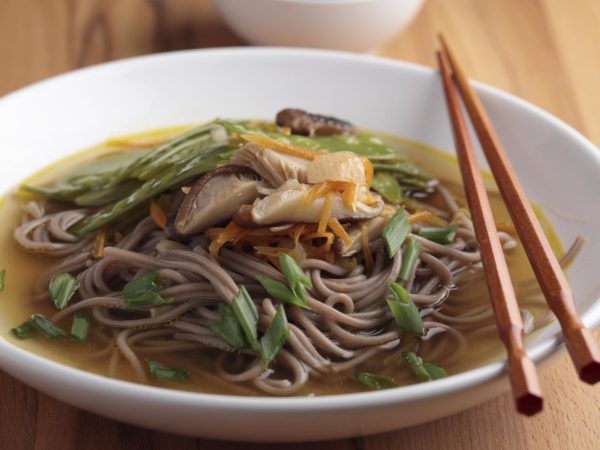 Umami (pronounced oo-MAH-mee) is a Japanese word for a taste that can’t be categorized as one of the four tastes we traditionally recognize: sweet, salty, sour, or bitter. Umami usually is described as meaty or savory – like the flavor of grilled fish or rich chicken soup. Parmesan cheese, anchovies, tomatoes, tomato paste, asparagus, and mushrooms are foods said to have umami.

Chemically, what distinguishes “umami” foods from others is glutamate, an amino acid. Some studies have shown that we have receptors on the tongue for glutamate and related compounds. Japanese scientists have accepted the existence of a “fifth taste” for years; many western scientists now agree with them and list umami along with sweet, salty, sour, and bitter.

In the traditional cuisines of East Asia, glutamate-rich foods such as seaweeds and mushrooms have long been used to add a deep savory flavor to soups and sauces. The Japanese scientist who came up with the word “umami” to describe this elusive taste later devised monosodium glutamate (MSG) in order to add the flavor to food in the kitchen and at the table. Introduced in the U.S. under the brand name “Accent” in the 1950’s, it became very popular.

As you know, cooks in Chinese restaurants often add large amounts of MSG to dishes, but that’s not the only place you’ll find it these days. If you check labels and ingredient lists, you’ll see that MSG as well as other glutamic acid salts (monopotassium glutamate and monoammonium glutamate) are added to all kinds of processed foods including soup, chips, macaroni and cheese and various fast food meals, to give us that umami taste, which we seem to crave. (I think our ability to detect it evolved to guide us toward rich sources of protein.) In fact, The Wall Street Journal reported in December 2007 that the food industry is now focusing on umami as a way to produce highly flavored foods while reducing the amounts of salt, fat, sugar and artificial ingredients. The Journal article said that the industry does not want to rely on MSG, which now has a bad reputation. Consumers associate it with allergic reactions, headaches and other symptoms.

Although the preponderance of evidence has not linked MSG with any serious health problem, I see no reason to add it to food. There is little doubt that some people are sensitive to it, and that those who eat large amounts (three grams or more per meal) on an empty stomach as well as people with severe and poorly controlled asthma can experience numbness, burning sensations, tingling, facial pressure or tightness, chest pain, headache, nausea, rapid heartbeat, drowsiness and weakness. (Note that three grams is a lot of MSG. The amount in a typical serving of food to which MSG is added is less than 0.5 grams.)

If you want to boost the umami component of foods naturally, try using seaweeds such as kombu and mushrooms such as shiitake in soups, stocks and sauces. Or sprinkle some good Parmesan on your salads or vegetables. Here’s a recipe for Umami Sauce from True Food Kitchen.