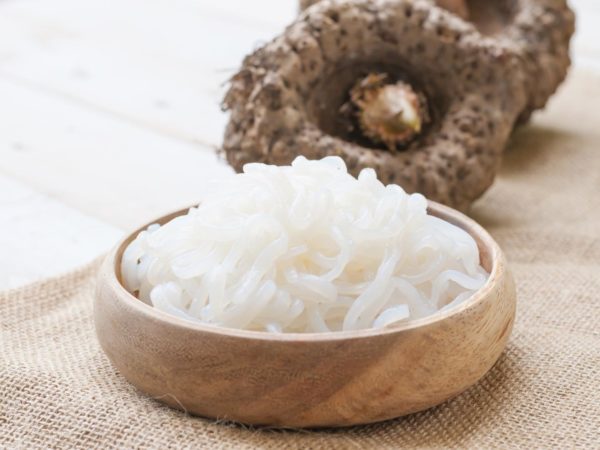 I’m a great fan of shirataki noodles. They’re made from the root of the konjac plant (Amorphophallus konjac) that is widely cultivated in both China and Japan. The popular name for the root in Japan is devil’s tongue or konnyaku. It is prepared there into foods that look like squares or strips of stiff gelatin, with a rubbery texture. The main component of the konjac root is glucomannan, a water-soluble dietary fiber consisting of mannose and glucose sugars.

Noodles made from konjac fiber are thin, translucent, and gelatinous. The name shirataki means “white waterfall,” which is descriptive of the appearance of the noodles. They’re low in carbohydrates as well as calories.

I first tried shirataki noodles while traveling in Japan, and am pleased to see they’re now sold in Asian markets in the United States and are also available online, sometimes precooked and ready-to-eat in vacuum-sealed plastic pouches. Always rinse them before using; the liquid they come in has an odor that you may not like. Because they are flavorless, you have to add shirataki noodles to a tasty broth or sauce. You can occasionally find shirataki noodles made with tofu, a combination that also gives you some protein and calcium.

As for its health benefits, the Japanese regard konjac as a high-quality food that benefits intestinal function. Apart from the fact that the shirataki noodles are low in carbohydrates and calories and could help with weight loss, some studies, including two published in the Journal of the American College of Nutrition (one in October 2002 and another in February 2003) suggest that glucomannan can help reduce cholesterol. Another study, following 22 patients with diabetes, found that a konjac-glucomannan supplement reduced both glucose and cholesterol levels. I’ve seen glucomannan and konjac fiber sold as supplements and promoted for weight loss, but I would be skeptical of these claims. Some countries, including Australia, have banned weight-loss products containing glucomannan, which were found to cause choking when caught in the throat.

You might also consider cellophane or bean-thread noodles, which are made from mung beans and are also low in carbohydrates and calories and gluten free. You’ve probably seen cellophane noodles in stir-fries and Vietnamese rice- wrapper rolls. They’re sold dried; you have to soak them in hot water before adding them to soups or other dishes.

Here is a photo essay of Fabulous Foods From Japan.