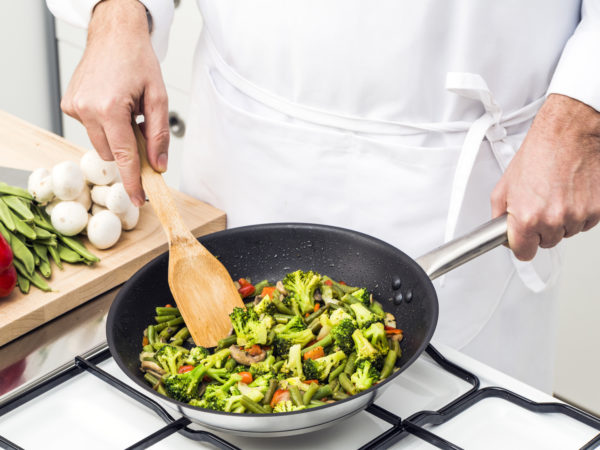 Sauté is French for “jump,” which pretty much describes what goes on in the pan. Sautéing involves cooking things quickly in a small amount of fat, just enough to glaze the bottom of your pan. After you add the food, you turn or toss it frequently so that all sides cook without burning. The maneuvering of the food (tossing, turning or stirring) leads to the “jumping” or sautéing. This technique works best with foods that are sliced thin so that they cook thoroughly without a lot of heat. Stir frying, an Asian cooking method, is similar to sautéing – but here, vegetables and protein usually are chopped into small pieces and tossed quickly and constantly in a wok or skillet. Stir frying is done at higher temperatures than sautéing.

I like sautéing because it requires so little fat. I use small amounts of extra virgin olive oil or organic expeller-pressed canola oil. I also like “steam frying” – this involves sautéing food briefly in a little oil and then adding some water, stock or wine and covering the pan. You allow the food to cook until it is almost done and then uncover and boil off any excess liquid. Steam frying keeps the temperature of the food in a lower, safer range than sautéing  or stir frying.

I urge you to avoid frying foods, and especially deep frying, because the amount of fat needed adds many calories to food and also exposes you to the health risks of oxidized fat.

I also enjoy grilling outdoors, but I advise sticking to grilled vegetables or fish. The high temperatures needed for grilling (or broiling) meat and poultry produces carcinogenic compounds called heterocyclic amines (HAs) that can increase the risk of colon cancer in those with a genetic predisposition to the disease and may also raise the risk of other cancers. You can try to reduce HA formation by choosing lean cuts of meat and marinating them before grilling. Marinades containing ginger, rosemary and turmeric may help reduce HA formation.

Another downside to high heat cooking – including broiling, grilling and frying – is the formation of a class of toxins called advanced glycation end products (AGEs). While AGEs give food appetizing tastes and smells, they have been linked in the body to inflammation, insulin resistance, diabetes, vascular and kidney disease and Alzheimer’s disease. You can reduce your intake of AGEs by steaming or boiling or by making stews – the key is to cook at low heat and to maintain the water content of foods. Researchers from Mount Sinai School of Medicine in New York City found that AGE levels are higher in older people than they are in younger ones but can be elevated even in healthy young people.  They also found that the greater the consumption of foods high in AGEs, the higher the levels of c-reactive protein, a marker for inflammation in the body.