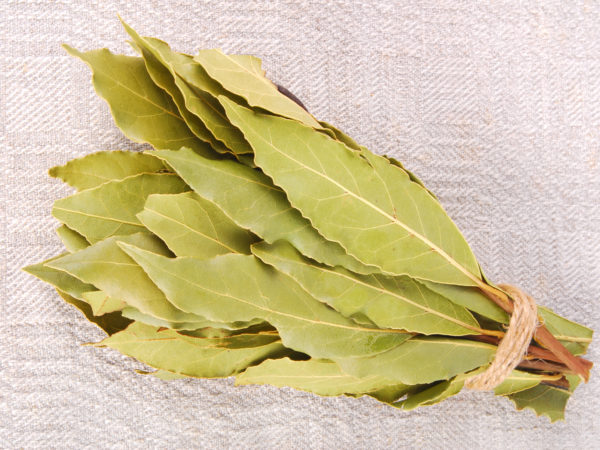 Native to the Mediterranean region, the bay laurel (Laurus nobilis) is a hardy evergreen shrub bearing leaves that, fresh or dried, have long been used for cooking. The culinary “bay leaf” may also come from the California bay tree (Umbellularia californica, Lauraceae), which has a stronger flavor.

The bay laurel leaf has been a symbol of wisdom and honor from ancient Greek times up to the present day. Wreaths woven of the leaves and branches were placed on the heads of nobility, Olympians and honored poets.  The world still celebrates its college “baccalaureates” as well as poet and Nobel “laureates.”

Cultures around the world have traditionally used bay leaves to treat various conditions, from inducing abortion to treating high blood pressure; however there is little clinical research to validate these claims.

Orally, infusions of the bay leaf have been used to improve digestion, reduce flatulence and relieve gastrointestinal distress; to help stabilize insulin levels and to lower blood sugar. Caution should be taken not to consume the whole bay leaf as it can become lodged in the esophagus or its barbed edges can perforate the lining of the GI tract.

Topically, it has been applied to help prevent dandruff and treat skin irritation, and has been used to address women’s health concerns including infertility and menstruation. The oil of the bay leaf has also been used to treat sprains and bruising as well as headaches.

The bay leaf contains eugenol, which has anti-inflammatory and antioxidant properties. While bay leaves contain vitamin A and some essential minerals, consumption is typically too low to significantly contribute to daily nutrient intake.

Bay leaves have also been reported to be useful in repelling moths, flies, roaches, mice and silverfish in the home, as these pests dislike the leaf’s fragrance. While evidence for this kind of use is thin, there’s no harm in trying it: place a bay leaf in your containers of flour, rice, and other dry goods. You may also tape a leaf inside your cupboard doors or to your shelves.

Today, the bay leaf is primarily used as a culinary seasoning. It has a sharp, slightly bitter taste similar to that of oregano. It can be added to soups, stews and dishes that cook for long periods of time – be sure to remove the bay leaf before serving. Ground leaves can be added to meats and potatoes.  Creole cooks will commonly use it in their many slow-cooked and seafood dishes.  It’s even used in their fruit punch.

Available year-round, dried bay leaves are the most commonly used. Store them in a tightly sealed glass container in a cool, dark spot for up to six months.

Dr. Weil’s take on bay leaf:
Bay leaf is commonly used to season soups, thick sauces and stews and is mainly considered a background flavor. For these reasons, I find bay leaves to be particularly compelling in my winter cooking. They also lend an aromatic essence to steamed seafood and shrimp, and are a great addition to pickling spices.