We’ve long known that healthy diets are linked to a reduced risk of depression.  In 2019, an Australian study showing that switching to a healthy diet for as little as three weeks made a significant difference for depressed young adults. Researchers from Australia’s Macquarie University report that study participants whose diets were unhealthy and who had moderate to high symptoms of depression showed “significant improvement in mood” and lower anxiety scores after changing their eating habits. They also noted that reducing the intake of processed food and increasing consumption of fruit, vegetables, fish and olive oil “add to a growing literature showing that modest change to diet is a useful adjunct therapy to reduce symptoms of depression.”

Three months after the study ended, the authors followed up with 33 participants. They found that while only 21 percent of these young people fully remained on the healthy diet, those who did maintained their improvements in mood.

Recently, another Australian study, published in April, 2022, found that depressed men between the ages 18 and 25 whose diets were poor felt much better after switching to the Mediterranean diet. Lead researcher Jessica Bayes of Sydney’s University of Technology noted that the study was the first randomized clinical trial to assess the impact of a Mediterranean diet on the symptoms of depression in young men. She added that “there are lots of reasons why scientifically we think food affects mood. For example, around 90 percent of serotonin, a chemical that helps us feel happy, is made in our gut by our gut microbes. There is emerging evidence that these microbes can communicate to the brain via the vagus nerve, in what is called the gut-brain axis” and “to have beneficial microbes, we need to feed them fiber, which is found in legumes, fruits and vegetables.”

She added that she and her team “were surprised by how willing the young men were to take on a new diet. Those assigned to the Mediterranean diet were able to significantly change their original diets…over a short time frame (with the help of a nutritionist).” She noted that the new findings suggest “that medical doctors and psychologists should consider referring depressed young men to a nutritionist or dietitian as an important component of treating clinical depression.” 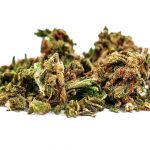