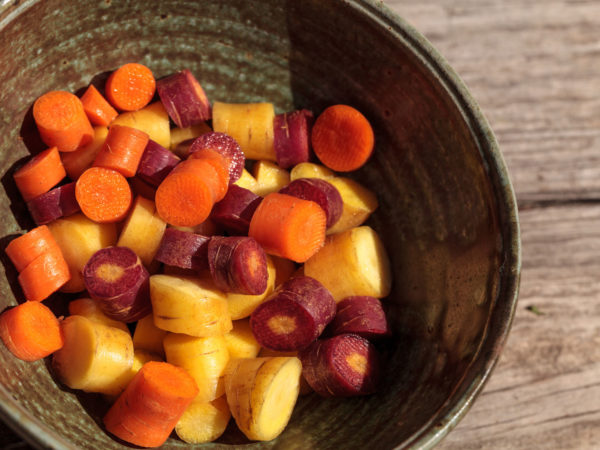 Beta-carotene is a carotenoid. Carotenoids are naturally occurring pigments found in plants, and are largely responsible for the vibrant colors of some fruits and vegetables. Beta-carotene, for example, is responsible for giving carrots their orange color. Once ingested, beta-carotene is either converted into vitamin A (retinol), which the body can use in a variety of ways, or it acts as an antioxidant to help protect cells from the damaging effects of harmful free radicals. As much as 50 percent of vitamin A in a typical diet is provided by beta-carotene and other carotenoids.

A small number of carotenes, including beta-carotene, are often called “provitamin A” because they are a precursor to production of vitamin A in the body. The carotenes lycopene, lutein and zeaxanthin cannot be converted into vitamin A, though they provide other health benefits.

Why Is It Necessary?

Beta-carotene is considered an antioxidant and is also a precursor to vitamin A. This compound helps maintain healthy skin and also plays a vital role in eye health. Individuals who consume the necessary levels of beta-carotene can lower their risk for coronary artery disease, stroke, macular degeneration, and other age-related diseases.

What Are The Signs Of A Deficiency?

Vitamin A deficiency is fortunately rare in industrialized nations, but is all too common in developing countries, where it is the leading cause of preventable blindness in children according to the World Health Organization. Indicators include night blindness, hair loss, skin irritation and dry or inflamed eyes. The diagnosis is usually considered on the appearance of clinical indicators, and blood testing for vitamin A deficiency can be performed.

How Much, And What Kind, Does An Adult Need?

How Do You Get Enough From Foods?

The principal dietary source of beta-carotene is fruit and vegetables such as carrots, yams, spinach and kale. In fact, one cup of raw carrots contains 9,135 mg of beta-carotene. Since beta-carotene is only one of the many beneficial carotenoids, it is important to eat a wide variety of fresh produce to obtain a full spectrum of these important nutrients into your diet.

Are There Any Risks Associated With Too Much?

The most frequently reported side effect of consuming large quantities of beta-carotene, most commonly from carrots, and most often seen in infants, is a yellowing of the skin called carotenemia. Although harmless, it is important to distinguish it from jaundice, a yellowing of the skin which may indicate a serious underlying health problem. Smokers, former smokers, and those exposed to asbestos may have an increased risk of lung cancer from supplementing with isolated beta-carotene. Despite the possible link, it is still beneficial for these individuals to consume vegetables and fruits that are rich in beta-carotene.