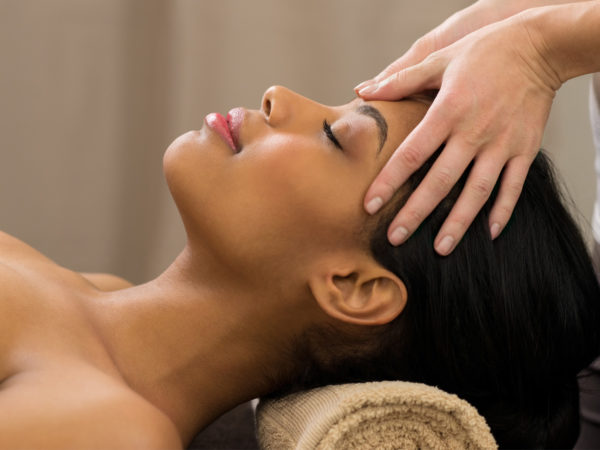 Some new evidence does suggest that practicing certain facial exercises can help plump up the cheeks, leading to a younger appearance. A study published in JAMA Dermatology in January 2018 found that midlife women who performed the exercises for 20 weeks strengthened certain facial muscles, leading to a reduction of some visible signs of aging. The exercises were developed by Gary Sikorski of Happy Face Yoga, a study coauthor.

As the face ages, skin loses elasticity and begins to sag. Also, the fat pads between muscle and skin, which give the face much of its shape, become thinner and slide down causing the face to “fall.” The Northwestern University study showed that certain exercises can counteract this to some degree, reducing some visible signs of aging.

For the study, 16 women between the ages of 40 and 65 performed two sets of 90-minute exercises during training sessions. Then they practiced the exercises at home, first for 30 minutes a day for eight weeks, and then every other day for 12 weeks. All told there were 32 different exercises each of which takes about a minute. Here are two examples:

Study leader Murad Alam, a dermatologist, noted that many muscles collectively allow the movement of the cheeks, and that “our study showed that building these up makes the upper and lower cheeks look fuller.”

After the 20 week study ended, two dermatologists who weren’t involved in the research looked at photos of the women before, during and after the facial exercise program. Using a standardized facial aging scale, they examined 19 features of each woman’s face, rating them at the beginning, after eight weeks of exercise and at week 20. They determined that upper and lower cheek fullness was significantly enhanced as a result of the exercises. Based on these changes their estimates of the average age of the women was almost three years younger than it had been when they examined the photos from the beginning of the study.

Despite these promising results, the researchers said the findings must be confirmed by a larger study. They also made the point that it isn’t clear how long people would have to do the exercises to achieve the results seen. And since most of the women in the study were white and middle-aged, the researchers couldn’t say whether the exercises would work as well on men, on older women or those of other ethnicities.