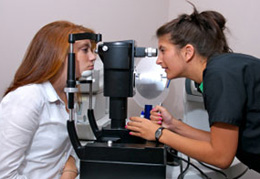 Glaucoma is a form of optic nerve damage and is one of the leading causes of vision loss and blindness in the United States. There are several types of glaucoma, but the vast majority of cases appear to be hereditary and usually develop in middle age. Having your eyes checked regularly (every two to three years after age 40; and every one to two years after 60) will help reveal glaucoma-related changes that can be treated before any eye damage occurs.

Risks for glaucoma are higher among African Americans over age 40, and for everyone over age 60 (especially Mexican Americans) as well as individuals with a family history of glaucoma.

What are the symptoms of glaucoma?

At first, there are no symptoms. Vision remains normal, and there is no pain, but over time you may notice that your peripheral (side) vision is gradually deteriorating – you can see objects in front of you clearly but may miss objects to your side. If the disease remains undiagnosed and untreated, you will eventually lose the ability to see objects to the side and out of the corner of your eyes. Without any treatment, you will gradually be able to see less and less in front of you until no vision remains.

One type of glaucoma – called “acute” or “narrow angle” glaucoma – can develop suddenly and is considered a medical emergency requiring immediate treatment. Symptoms include severe pain in the eyes, blurred vision, dilated pupils, and sometimes, nausea or vomiting. These acute cases represent only 10 percent of all glaucoma.

Ophthalmologists once believed that glaucoma was caused by liquid in the eye not draining properly (liquid normally flows in and out of the eye); they thought the pressure from the trapped fluid damaged the optic nerve (which carries images from the eyes to the brain). However, we now know that you can have glaucoma-related vision loss even when your intraocular (inside the eye) pressure is normal – and you can have high intraocular pressure without developing glaucoma. While increased eye pressure does mean that you are at an increased risk for glaucoma, the disease itself can be diagnosed only when the optic nerve is damaged.

Treatment may include eye drops or oral medication or both. Some of these drugs work by causing the eye to make less fluid. Others lower pressure by helping fluid drain from the eye.

Be sure to tell your doctor about any other medications you are taking – the drops can interfere with the way other drugs work. Side effects of commonly used glaucoma medications can include stinging, burning, and redness in the eyes.

In addition to drugs, surgery may be recommended. One procedure, laser trabeculoplasty, helps reduce intraocular fluid by stretching the natural drainage holes in the eye and allowing the fluid to drain better. Side effects of the laser treatment can include soreness or inflammation inside the eye. While this procedure works well at reducing pressure, its effects can wear off over time.

Sometimes, ophthalmologists recommend incisional surgery (an outpatient procedure) to improve fluid flow out of the eye by enlarging the drainage holes with a surgical instrument. This carries a small risk of infection and bleeding and can also cause undesirable changes in intraocular pressure, scarring, and loss of vision, although these complications are considered unusual. Sometimes surgery doesn’t work, and even when it does, you’ll still need to use drops or take drugs afterward.

What therapies does Dr. Weil recommend for glaucoma?

No serious eye condition – including glaucoma – should be treated solely with alternative approaches. An ophthalmologist’s care is vital. But there is some evidence that you can also help ease the condition by making the following adjustments:

Also: Stop smoking; smoking has been shown to contribute to the condition. Using cannabis, however, has been shown to lower intraocular pressure, but it may be that synthetic analogues of THC, the active ingredient in cannabis, are a better bet as more can be ingested without lung irritation.