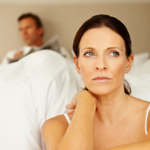 You ask a provocative question. In its January 4, 2003 issue, the British Medical Journal published an article arguing that pharmaceutical companies are trying to create a medical diagnosis called "female sexual dysfunction," a condition that may not exist. And yet, according to some estimates, 43 percent of women suffer from it. One source for that figure was an article in the February 10, 1999 Journal of the American Medical Association, which reported on responses from more than 1,700 women to questions on whether they had experienced sex-related problems such as lack of desire or lack of lubrication that had lasted for at least two months. The authors did note, however, that some of the problems were related to non-medical issues, such as a drop in income, having young children at home, or stress.

A study from the University of Pennsylvania published in October, 2002, found that women who reported declining libido had fluctuating levels of testosterone, the hormone that governs sex drive in both men and women. Those who had the most variability in testosterone levels were two to three times more likely to report decreased libido than those who had the most stable levels. In the past, researchers believed that decreased levels of testosterone, particularly after menopause, were to blame for declining sex drive among women. Apart from fluctuations in testosterone levels, the only other factors affecting female sex drive discovered in this study were depression and the presence of children in the house.

Testosterone replacement can restore a flagging sex drive, but new evidence suggests that it may be a risky strategy. In July 24, 2006, a study published in the Archives of Internal Medicine found that taking estrogen and testosterone together appears to more than double the risk of breast cancer. The findings came from the long-running Nurses Health Study, which includes more than 120,000 women. Over 24 years of follow-up the researchers found that the risk of breast cancer among women taking the combination of estrogen and testosterone (most often in the form of the prescription drug Estratest) was 2.5 times higher than it was among women who never took hormones. Even after researchers accounted for other breast cancer risk factors, such as family history, age, and weight at menopause, they still noted an increased risk associated with taking the combination. Given these findings, testosterone replacement may not be the best option for women, at least not until we know more about the risks it presents.

Unfortunately, there are no other proven remedies for low sex drive in women. Damiana (Turnera diffusa), a plant native to Mexico with a reputation as a female aphrodisiac, may be worth a try, although it hasn’t been well studied. Look for it in health food stores and follow the dosage recommendations on the label. If vaginal dryness, a menopausal symptom, is the source of the problem, the over-the-counter lubricant Replens vaginal lotion can help. Topical estrogen, available by prescription, can also relieve vaginal dryness.