What Is Poison Oak?

Poison oak is in the Toxicodendron genus of flowering plants, which also includes poison sumac and poison ivy.

Western or Pacific poison oak, a bushy shrub or climbing vine, can be found all along the Pacific Coast, from southern Canada down to the Baja California peninsula. Poison oak grows from sea level to as high as 5,000 feet and can be characterized by its alternate leaves – emerging from the stem one at a time. The three- (or occasionally five-, seven- or nine-) shiny green leaflets produce a white-green blossom at the stem in spring, reveal round fruit in late summer, and turn a turn deep red hue in autumn.

Atlantic or Eastern poison oak is native to the sandy soils of the eastern/southeastern United States and can be found as far west as Texas and Oklahoma. The low-growing shrub is distinguishable by its similarity in appearance to white oak leaves. The three green leaflets have an ever-so-slight hairy or fuzzy appearance (more obvious on the berries) and emerge from the stem in a cluster, turning yellow or orange in the fall. Also, if you spot thorns, you know that the plant cannot be poison oak.

An oily resin urushiol is found in the roots, stem, leaves, flowers, and the berries of both varieties (even when the plant is dead). Exposure to it can result in skin irritation ranging from mild to severe. To make matters worse, approximately 85% of the population is allergic to urushiol, which results in a more severe reaction.

Primary contamination results from contact with bruised or broken plant parts. And because the lacquer-like resin does not dissolve in water, it’s hard to wash off. However, exposure is not limited to brushing up against the plant and a reaction can also occur if urushiol is inhaled when burning the plant, which can cause a reaction in the eyes, nose, throat and lungs.
Other secondary exposures may result from handling garden, hunting or sports equipment, and camping gear exposed to poison oak. Thick fur protects most pets that run through poison oak patches from developing symptoms. However, people who touch contaminated pets can come directly in contact with the resin and may develop a reaction.

Fluid in the skin’s blisters does not contain urushiol. If the blisters break, the fluid will not result in spreading of the poison oak. Scratching other parts of the body with contaminated fingernails, however, may spread poison oak, and urushiol can remain under the nails for several days unless the nails are extensively cleaned. A person who has washed thoroughly and has changed into clean clothing will not spread poison oak, since the only way to get poison oak is through direct contact with the toxic resin.

What Are Poison Oak Symptoms?

Severity of poison oak skin reaction depends on the degree of one’s sensitivity, the amount of exposure, and upon which parts of the body are exposed. Sensitive body parts, including the eyes, lips, and genitals that are exposed to poison oak sap will experience a more severe reaction.

Skin irritation characterized by redness, blistering, swelling, and severe itching generally develops 24 to 48 hours after the exposure. However, it only takes 10 to 15 minutes for the urushiol to penetrate the skin and bond with cell membranes. Some people experience symptoms after as little as 30 minutes. Others may not have symptoms until 14 days following exposure. In typical cases, the reaction is most severe five days after the exposure. Mild cases of poison oak last from five to 12 days. Severe cases may last up to three weeks or longer.
The rash often appears streaked and may develop into oozing blisters. While the skin rash may be uncomfortable, it’s typically not of serious concern and will resolve on its own in about one to two weeks.

Contact a doctor immediately if you are highly sensitive or have the following symptoms:

Treatment consists mostly of protecting the damaged skin, preventing infection, and relieving the itching. Over-the-counter medications may be used as poison oak treatments and as a poison ivy remedy. Store-brand or generic versions of these medications also work and are usually available. If your poison oak reaction is severe, you should see a physician for more extensive treatment, employing stronger steroid medications.

Avoid the use of certain Caladryl products that contains the antihistamine ingredient “diphenhydramine,” unless directed by your physician. Applying diphenhydramine to open sores and taking a diphenhydramine by mouth, such as Benadryl, can cause a toxic build-up of the drug.

The best poison oak treatment is to run hot water on the affected areas, as hot as you can stand. This will seem counterintuitive since heat increases the itching and cold soothes it. Under hot water the itching will briefly become very intense and then will stop for several hours, as if the nerves responsible for conveying the sensation to the brain become overloaded and quit. As soon as the itching starts again, go back to the hot water. If you do this conscientiously the whole reaction will complete itself quickly and your skin will return to normal much faster than it would otherwise.

How poison oak can be prevented: 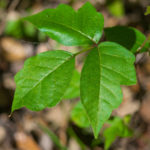