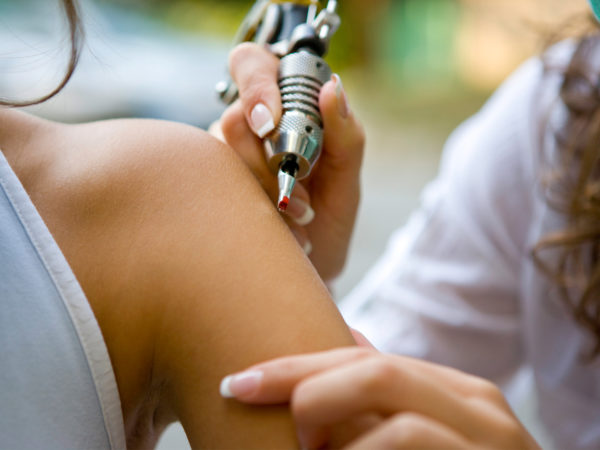 As tattoos become more popular concerns about the safety of some of the inks used have been raised. For example, in 2015, the U.S. Food and Drug Administration (FDA) alerted tattoo artists and consumers to avoid certain grey-wash ink shades sold by the marketer and distributor, A Thousand Virgins because of bacterial contamination. The FDA acted after an outbreak of mycobacterial infections were reported in people who had recently been tattooed in Florida. Those inks have since been recalled. The infections caused redness; swelling; itching; raised pink, red, or purple blemishes or local pain. The FDA reported that sepsis, a potentially life-threatening body-wide blood infection, occurred in some cases, as well as permanent scarring of the skin.

In the summer of 2016, a report on a study from the European Commission’s Joint Research Center noted that most of the ink used in Europe for tattoos and permanent makeup is imported from the U.S. and may contain carcinogens, toxic heavy metals, and bacteria. The researchers concluded that the risk of skin cancer from tattoos “has been neither proved nor excluded.” (No increased risk of skin cancer in people who have tattoos has been seen in the U.S., according to a dermatologist writing on the website of the Skin Cancer Foundation).

The FDA considers tattoo inks cosmetics, and while it has the authority to regulate their color additives, the agency hasn’t done much about it, because in the past there has been scant evidence of safety concerns. However, in response to an increasing number of reports of bad reactions, the FDA is now researching the issue. That investigation is looking at how the inks break down in the body, the long and short-term safety of the pigments in them, and how the body responds to the interaction of light with them.

On its website, the FDA warns that some people may develop allergies to ink pigments. (These are linked primarily to red ink, and the reactions may not occur for many years after tattooing.) It also notes that scar tissue may form as a result of tattooing and removing tattoos, that small knots or bumps called granulomas may form around particles of tattoo pigment, and that tattoo ink may spread to the body’s lymphatic system (although it isn’t known whether this has any health consequence).

If you decide to go ahead with getting a tattoo, make sure the tattoo parlor and artist are in compliance with all state and local laws. You can check this on the website of the National Conference of State Legislatures. Your county or city health department can give you information on local regulations. In addition, ask the tattoo artist where the ink comes from and make sure that he or she wears sterile disposable gloves and changes them after every client. Choose a tattoo artist who uses individually packaged single-use kits that are sealed and hold disposable needles. And make sure you’re satisfied with the cleanliness of the tattoo parlor and equipment. (Also, here is some additional information about tattoo removal procedures.)