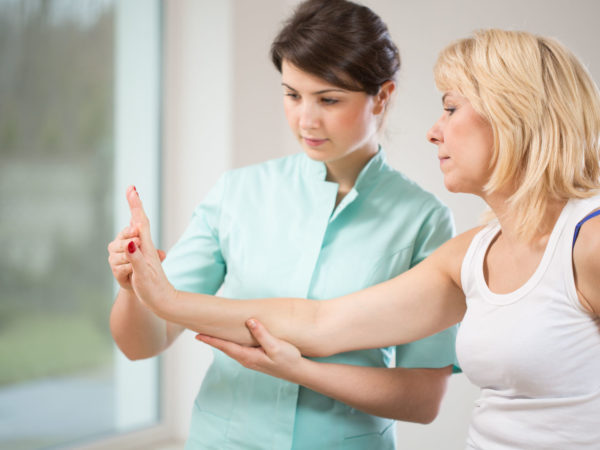 The risk of carpal tunnel syndrome is three times higher among women than men, perhaps because the tunnel itself may be smaller in women. Risks are also higher than normal among individuals with diabetes or other metabolic disorders that can affect the body’s nerves and make them more susceptible to injury.

In addition, there is a higher than normal incidence of CTS among those with assembly line jobs whose work includes manufacturing, sewing, finishing, cleaning, and packing meat, poultry, or fish. Carpal tunnel syndrome is three times more prevalent in these lines of work than it is among data-entry personnel.

What are the symptoms of carpal tunnel syndrome?
The first signs are often burning, tingling (or itching) and numbness in the palm and fingers. The dominant hand is usually affected first. Most people begin to notice the sensations in bed at night and, in the morning, feel as if they have to shake their hands or wrists to restore normal feeling. As the condition worsens, symptoms include pain, weakness or numbness in the hand and wrist radiating up the arm. Over time, weakness and atrophy can develop in some of the small hand muscles that control the thumb. You may find it hard to make a fist or pick up small objects and, in some cases, you may not be able to feel the difference between hot and cold with your hands.

Researchers led by David Ring, M.D., an assistant professor of orthopedic surgery, used the Bradford Hill criteria, a widely accepted method of determining the association between a disease and its cause, to evaluate factors contributing to CTS. They found that biological factors including genetics were three times more powerful than repetitive hand use and other occupational factors. The study was presented at the 74th Annual Meeting of the American Academy of Orthopedic Surgeons.

Another new slant on CTS came from ergonomics researchers at the University of California at San Francisco and McMaster University in Canada, who concluded that the angle of wrist flexion can increase pressure on the median nerve and established limits on how much the wrist can be flexed in each direction before nerve damage sets in. The study was published in the February 2007 issue of Human Factors: the Journal of the Human Factors and Ergonomics Society.

Other contributors to carpal tunnel syndrome include wrist injuries such as sprains or fractures that cause swelling, an overactive pituitary gland, hypothyroidism, rheumatoid arthritis, mechanical problems in the wrist joint, work stress, repeated use of vibrating hand tools, fluid retention during pregnancy or menopause, or the development of a cyst or tumor in the tunnel. In some cases no cause can be found.

Surgery for carpal tunnel syndrome may be recommended if symptoms last for six months. It involves severing or “releasing” the band of tissue around the wrist to reduce pressure on the median nerve. Surgery is an outpatient procedure, done under local anesthesia. It is performed via a two-inch incision in the wrist or endoscopically through two small incisions in the wrist and palm. A miniature camera is inserted through one of the incisions, through which the surgeon can visualize the tissue on a screen while surgical instruments are inserted through the other incision. Risks of either type of surgery include infection, nerve damage, stiffness and pain at the scar and, sometimes, a loss of strength. Full recovery can take several months, although symptoms may be relieved immediately after surgery.

What therapies does Dr. Weil recommend for carpal tunnel syndrome?
First, be sure to rest the affected hand and discontinue any activity that makes symptoms worse.

Vitamin B-6 (pyridoxine), can act as a natural therapeutic agent for nerve compression injuries when taken in 100 mg doses two or three times a day. (At doses higher than 300 mg daily, B6 has caused nerve damage in a few individuals; discontinue use if your symptoms are progressing.) Yoga has been shown to reduce pain and improve grip strength.

For quick relief, rub on arnica gel and wrap ice packs around your wrists for five minutes every few hours to ease the pain and inflammation.