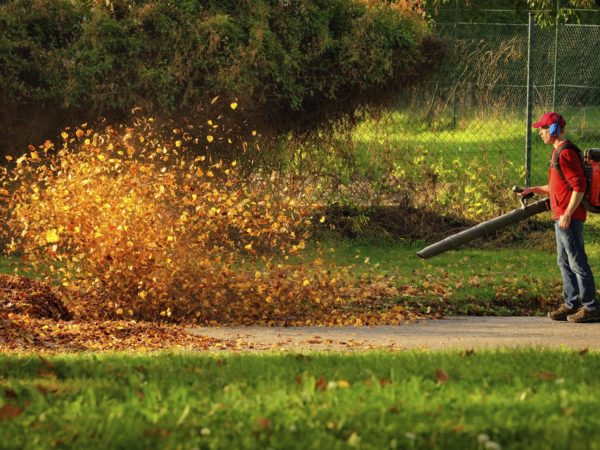 When it comes to really bad ideas, the leafblower ranks right up there with adding lead to gasoline and using CFCs in aerosols. Leafblowers are diabolical machines. Even if the claims their promoters make for them were true, the damage leafblowers do outweighs such meager benefits by many, many orders of magnitude.

Thanks to decades of relentless lobbying by their manufacturers, the two-cylinder engines that drive leafblowers have never been regulated by any Federal or State agency. The engines, as a result, are crude, cheap, and inefficient, as well as harmful to the environment and everything living in it. Because they are designed to be air-cooled, the engines release 100% of their tailgate emissions directly into the environment, and since they also burn fuel very inefficiently, a leafblower running for one hour emits as many hydrocarbons and other pollutants into the atmosphere as a car driven at 55 mph for 110 miles.

The noise leafblowers make is hideous. Although they operate on only two cylinders, these machines run at at speeds roughly three times faster than a car’s. In the process lots of energy is released in the form of high frequency sound waves with decibel levels that far exceed acceptable limits. The incessant, high-pitched whine of a single leafblower in the distance is enough to set peoples’ teeth on edge; a couple of blowers going nearby can push almost anyone to the brink of homicide. The idea that leafblowers save time – which is the one and only argument for using them – is outrageous, since it implies that the time stolen from the rest of us is worthless.

Using these hideously noisy, highly polluting machines on sidewalks and driveways is bad enough. Turning them on lawns and gardens, beneath shrubs, between hedges, and around the trunks of trees – as everyone is obviously doing these days – is irrational. Unless, that is, the people who are doing it are landscape professionals, in which case it is negligent, almost to the point of criminal.

If that seems extreme, consider that wind blows from the nozzles of these machines at speeds in the range of 180 mph. Winds of that force do not occur naturally on Earth, except inside hurricanes and tornadoes. Worse, still, because the wind is carrying away large quantities of heat from the hyperactive engine, it is also very hot and exceedingly dry.

Subjecting everything at ground level to blasts of hot, dry, hurricane-force winds would be ill-advised at any time, since it cannot fail to injure plants and open pathways for pests and disease, while at the same time aiding and abetting the pathogens by distributing them over the widest possible area. In the summer, though, when the air is hot and the ground is dry and the plants are dehydrated and badly stressed to begin with, subjecting them to tornadic blasts of hot, dry air is, nonsensical, to put it kindly.

Leafblowers literally scour the earth: stripping off topsoil, desiccating roots, and killing vital soil-dwelling organisms, while, at the same time, propelling into the air clouds of dirt, dust and dangerous contaminants: volatile compounds, mold and fungal spores, weed seeds, insect eggs, pollen, molecules of the myriads of toxic chemicals people spray and sprinkle on their gardens, trees, and lawns, not to mention bird and rodent feces, and more.

It goes without saying (but must be said anyway), that leafblowers pose the greatest threat to the health and hearing of the untold numbers of landscape workers who use them on a daily basis, in most cases without adequate protective equipment, for intervals that far exceed OSHA guidelines. Unfortunately, the workers themselves tend to exaggerate the benefits and deny the risks of blowing leaves with machines, which they strongly favor over rakes, for reasons that probably have more to do with symbolism than practicality.

Ironically, leafblowers were not invented to blow leaves; they were originally designed as crop dusters. In other words, they didn’t come about in response to a genuine need for a mechanized solution to the leaf-removal problem. Because there wasn’t any problem. Now we do have a problem, but it isn’t leaves, it’s these infernal machines.

Gasoline-driven leafblowers have been banned in scores of California counties, including Los Angeles and hundreds of municipalitiesacross the U.S. and Canada, and none of the horrors that were predicted by landscapers – untidy lawns, escalating costs, declining property values – has ever come to pass.

The phenomenal proliferation of leafblowers has far more to do with marketing than efficiency; indeed, when all the real costs are factored in their alleged benefits don’t even begin to justify their penalties and risks. Cheap to produce, priced to sell, and aggressively marketed, the real function of leafblowers is to rake in money for the huge corporations that manufacture them.

Winifred Rosen is co-author with Dr. Weil of “Chocolate to Morphine: Everything You Need to Know about Mind-Altering Drugs.”