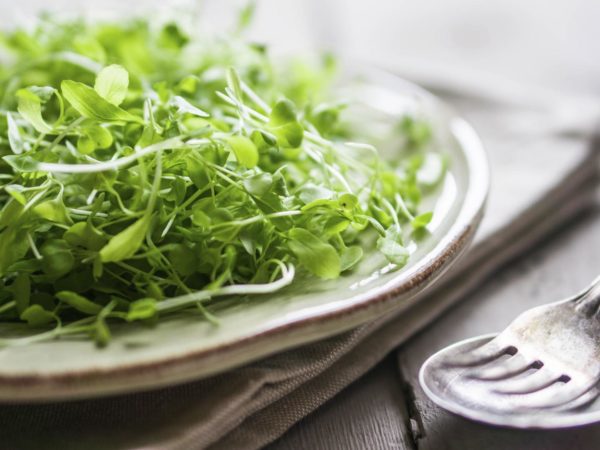 According to the U.S. Department of Agriculture “microgreens” is a marketing term referring to tiny, edible greens grown from the seeds of vegetables and herbs. They’re smaller than baby greens and bigger than sprouts. Microgreens germinate in soil or soil substitute, require sunlight for growth and are harvested when they’re seven to 14 days old and one to three inches tall. Their flavor is much more intense than that of mature greens. You can add them to salads or use them to garnish soups and sandwiches.

By way of comparison, baby greens are just small versions of fully mature plants that are picked before they’re fully-grown. Sprouts are seeds that germinate after soaking in water and grow for up to 48 hours before they’re harvested.  (Because they’ve been associated with at least 30 outbreaks of food borne illnesses since 1996, mostly due to the bacteria Salmonella and E. coli, the U.S. government warns against eating raw sprouts.)

Microgreens do appear to have a significant nutritional advantage. A study from the USDA’s Agricultural Research Service (ARS) found that, at equal weights, almost all of the tiny greens contained about five times more nutrients than found in the mature leaves of the same plants. The investigators measured essential vitamins and carotenoids, including vitamins C, E (tocopherols), K and beta-carotene in 25 commercially grown varieties of microgreens, including red cabbage, cilantro, garnet amaranth, and green daikon radishes.

They found that the nutrient content varied widely. For example, total vitamin C content ranged from 20 to 147 mg per 100 grams of seed leaves, (cotyledons). Amounts of the carotenoids beta-carotene, lutein, zeaxanthin and violaxanthin (an orange coloredpigment) ranged from about 0.6 mg to 12.1 mg per 100 grams of fresh weight of the cotyledons. (The authors noted that for comparison purposes, the weight of an apple is 100 to 150 grams.) They also reported that red cabbage microgreens were highest in vitamin C, and green daikon radish microgreens contained the most vitamin E.  However, nutrient content can vary widely depending on where the greens are grown, when they’re harvested and the kind of soil used.

If you buy or grow microgreens, you’ve got to use them quickly since they have only a few days of shelf life. The ARS investigators found that the plastic clamshell containers in which they’re typically sold don’t provide the right balance of oxygen and carbon dioxide for live greens to “breathe.”  Reportedly, microgreens are easy to grow at home on a sunny windowsill.

Be sure to wash them gently and thoroughly before eating. Cooking them isn’t recommended.