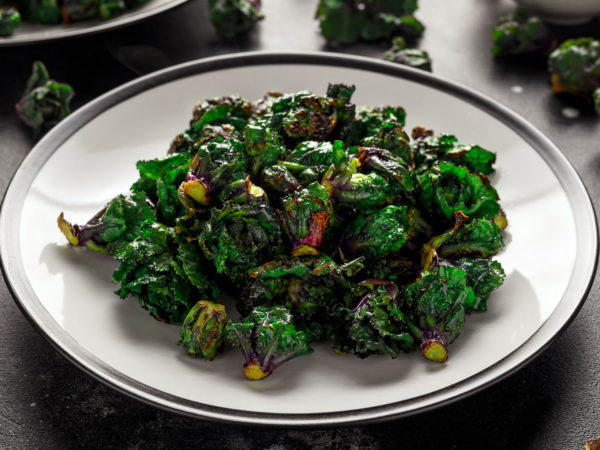 Kalettes, which were introduced in the United States in the fall of 2014, are a hybrid of kale and Brussels sprouts that looks like a head of curly-leafed purple and green sprouts with purple stems. The vegetable was developed over 15 years by the British Tozer Seeds company. One of the reasons the new vegetable was created was the waning popularity of Brussels sprouts in the U.K., where they’re most commonly eaten only at Christmas dinner. As for kale – in Britain it’s known mainly as sheep food.

Hybrids are produced by crossbreeding compatible plants, unlike genetically modified vegetables, which are created by tinkering with their DNA. The name “Kalettes” could prove confusing to shoppers in U.S. markets – it sounds more like a cheerleading team than it does a new and nutritious vegetable. Kalettes have been on the market in Britain for some time under the name “Flower Sprouts.” Some small producers who have been marketing versions of the new vegetable in the U.S. have been calling it “lollipop kale sprouts” or “BrusselKale.”

Whatever you call it, Kalettes taste slightly nutty, milder than kale and less earthy than Brussels sprouts. Unlike kale, which has big, wide leaves, Kalettes’ leaves are small and curly with green sprouts. They don’t look much like either kale or Brussels sprouts. They are high in vitamins C and K. A one and a half cup serving gives you only 45 calories. Both Brussels sprouts and kale are rich sources of organosulfur compounds that have been linked to cancer prevention.

You can roast Kalettes as you would Brussels sprouts, sauté them, grill them whole in a grill basket or add the leaves to salads. You can already find recipes online.

The last new vegetable hybrid introduced nationally was broccolini, a cross between broccoli and Chinese broccoli (kai-lan) that became available in 1998. You may have seen it described as “baby broccoli.” It cooks more quickly than regular broccoli, so you have to watch it to make sure you don’t overcook it. The long stems taste a bit like asparagus.

Keep an eye out for broccolini and the new Kalettes. They’ll broaden your vegetable horizons and give you a nutritional boost.