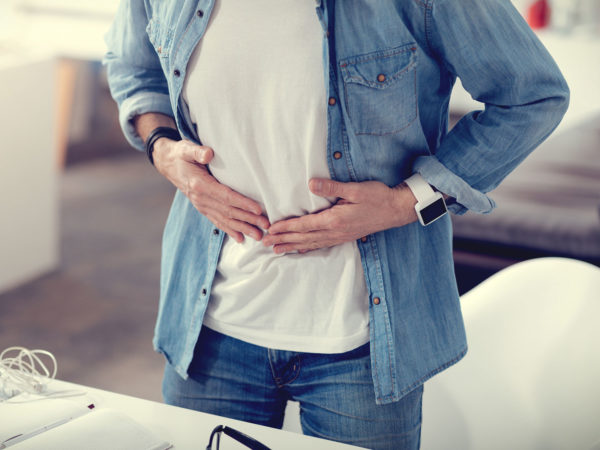 Fiber refers to the parts of plant foods that humans cannot digest. Good sources include bran cereals, beans, vegetables, fruit and whole grains. People who eat a lot of fiber have a better-functioning gastro-intestinal system than those who eat too little. Fiber increases the bulk and frequency of bowel movements, and a lack of dietary fiber is a common cause of constipation. It also may help reduce the risk of colon and rectal cancer.

Unfortunately, for all the benefits it provides, increasing fiber intake can lead to uncomfortable bloating. Much like beans, fiber contains types of complex carbohydrates that we can’t digest but bacteria in the colon can, producing methane gas in the process.

You’ve got lots of company – new research suggests that bloating affects up to a third of U.S. adults. The good news is that a study from Johns Hopkins published in June (2019) found what may be a simple solution to troublesome bloating – cut down on salt intake. The researchers noted evidence that sodium can stimulate bloating and then re-analyzed data from a large clinical trial that took place in the late 1990s, the Dietary Approaches to Stop Hypertension-Sodium (DASH-Sodium) trial. They found that prior to the study 36.7 percent of the participants reported bloating, which the researchers wrote is “more or less in line with national surveys of bloating prevalence.” They also found that the high-fiber DASH diet increased the risk of bloating by about 41 percent compared to the low-fiber control diet and that men were more susceptible than women. When they looked back at data from the DASH trial and other diet studies from the 1990s, they found that the diets with the most sodium increased the risk of bloating by about 27 percent compared to those with the least sodium.

The researchers concluded that cutting back on salt may reduce bloating and enable people to maintain a healthy high-fiber diet. They are now investigating how sodium causes bloating. Study leader Noel Mueller, Ph.D., M.P.H., wrote that salt causes water retention, which may be one factor. “We hypothesize that sodium intake also alters the gut microbiome in a manner that modifies bacterial sulfide production,” he added. He and his team are also researching how protein, carbohydrate and fat affect bloating.

You can try cutting back on salt to see if it helps reduce the bloating you’ve been experiencing. Also be aware that individuals differ greatly in their tolerance to the undesirable effects of increased fiber consumption; sometimes, you can avoid them by increasing your intake slowly. Or, if it’s bran that gives you the most trouble, eat less of it, take smaller amounts more frequently, or concentrate instead on eating more fruits, vegetables and whole-grain products.