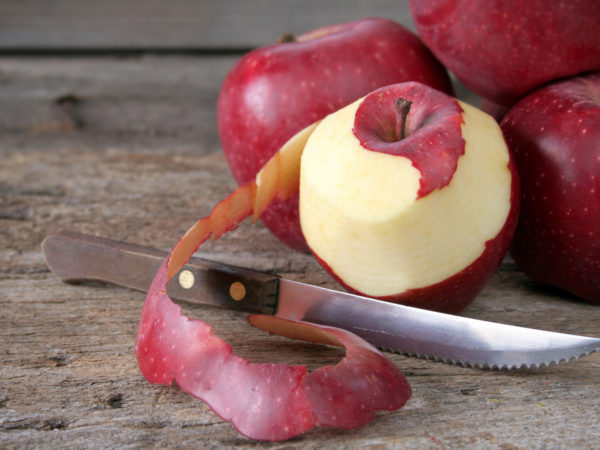 The skin of colorful fruits and vegetables often contains valuable nutrients, but that doesn’t mean that the skins are the best or only source of them. For example, apple peel provides some nutrients, but when you remove it (as I believe you should unless the apple is organic), levels of calcium, potassium and vitamin C aren’t appreciably reduced when you eat the rest of the apple. However, by removing the peel you do lose out on pectin, a soluble fiber that helps lower blood cholesterol and control blood sugar.

I recommend choosing apples that are fresh and organically grown and avoiding those grown with pesticides or treated with fungicides and wax. If you buy non-organic apples or other non-organic fruits and vegetables, getting rid of residues of the chemicals they’re treated with is more important than losing out on nutrients in the peel. Be sure to wash any non-organic produce that can’t be easily peeled to remove any chemical residues as best you can. To wash, use a small amount of diluted dish detergent and a vegetable scrubber, followed by a warm water rinse to remove residues and any food-grade wax.

Vegetables such as tomatoes and red bell peppers (technically these are also fruits since they have seeds) contain lycopene in their colored pigments, but they are also red throughout so if you were to remove the skin, you would still get plenty of the antioxidant. The same goes for the beta-carotene in carrots. You don’t lose much in the way of nutrients whether you cook sweet potatoes in their skin or if you peel and boil them.

Something else to bear in mind: before you cut melons and other fruits and vegetables that grow near the ground, be sure to scrub them with a brush to get rid of soil particles and possible bacteria, viruses or parasites. The Oregon State University Extension Service notes that microorganisms are more likely to survive in the stem scar, growth cracks and any damaged parts of produce, so be sure to trim away these parts before serving and eating.