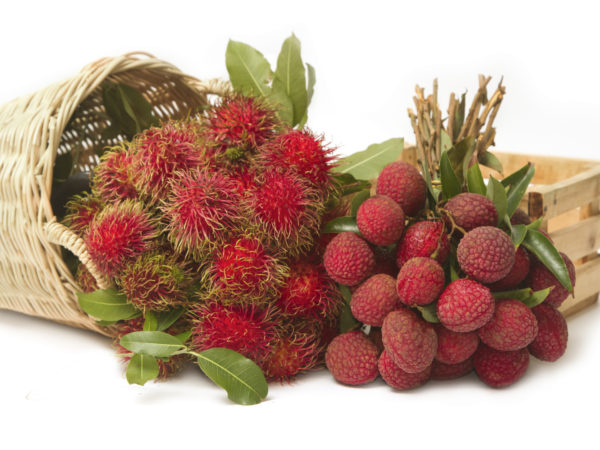 I love lychees, too. They’re delicious, but I only eat them fresh because, once you taste them, canned ones just don’t do it for you. You can get fresh lychees grown in Florida, Hawaii, and China when they’re in season: June and July. If you can’t find them in your local markets, look in Chinatowns or exotic grocery stores. Fresh lychees are oval- or heart-shaped, about two inches in size with bumpy red skin (the redder the “shells,” the fresher the lychee). To get to the fruit inside, you peel off the skin or bite off a small piece around the stem and then squeeze – the fruit will pop out of the skin into your mouth (don’t chew or swallow the big seed). The actual lychee looks a bit like a grape, but it is white, or, sometimes, pinkish and translucent. It is wonderfully sweet with a distinctive tropical flavor.

If you buy lychees fresh, you should refrigerate them when you get them home. Unlike some tropical fruit such as avocados, mangos and bananas, lychees don’t ripen after being picked. You can also freeze lychees – just seal them (in their skin) in a freezer bag. The skin may discolor during freezing, but that won’t affect the fruit inside or its taste. Frozen lychees taste like a fine sorbet – and I’ve also had lychee sorbet (at Thai restaurants), which is delicious.

Lychees are low in calories – only 63 in 10 average-sized fresh ones, which also provide about 69 milligrams of vitamin C, more than you would get in a small orange or half a grapefruit.

Incidentally, if you love lychees, you’ll probably also be enthusiastic about a related fruit, the rambutan, native to Malaysia. You’ll find them in the same Asian groceries, and they have a longer season: May to September. Rambutans are quite spectacular: they resemble sea urchins, with a mass of green-tipped red tendrils bristling from dark red skin. To get to the white flesh, just cut the skin open (or bite it – they may look prickly, but the tendrils won’t hurt you). Once the skin is open, you deal with the fruit in the same way. The texture is the same as that of a lychee with a somewhat different flavor.