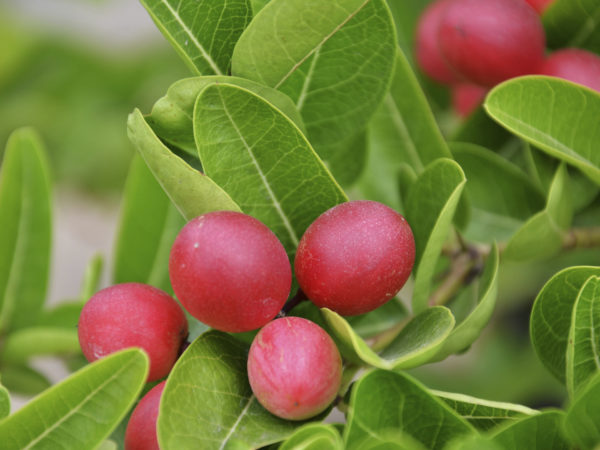 Miracle fruit is a longtime favorite of mine. It is a berry from a shrubby tree native to West Africa, now widely cultivated in Florida that has the effect of making sour foods taste sweet. It can make lemon juice and water taste like lemonade and is enjoying a burst of popularity as a novelty at parties in New York and San Francisco.

The scientific name of miracle fruit is Synsepalum dulcificum, and its effect is due to a protein – miraculin – that binds with sweet receptors in taste buds to make them respond to sour acidic foods.

You just have to suck on a single berry to get the effect, which can last up to an hour. But it can be a costly experience – one berry can cost $2.50, and according to the New York Times, 30 of them shipped overnight from Florida will run you $90. If you buy 30, you’ve got only a short time to invite all your friends to a tasting party, since the berries do not keep. They quickly turn brown and unappealing.

The unique effects of miracle fruit have been known to westerners since the 18th century, when a French explorer came across them in Africa and saw natives eating berries before they dined on gruel and drank palm wine.

I always thought it would be great to make a lozenge out of miracle fruit so you could cut down on sugar. Unfortunately, efforts in the United States to convert the fruit into a powder and a tablet ceased in the 1970s when the FDA decided that the product was a food additive that would need years of testing before it could be marketed. No such limitation applies to the fresh berries.

In 2005 the Guardian, a British newspaper, reported on a café in Tokyo that served bland dietetic foods plus miracle berries. Reportedly, the results were delicious, if pricey, low-cal treats.