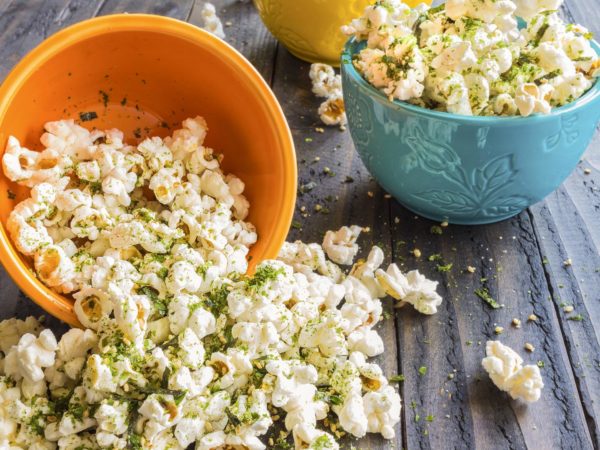 There are two safety issues involving the chemicals added into many brands of microwave popcorn. The first stems from the use of diacetyl in artificial butter flavor. Diacetyl has been linked to a rare type of lung disease, bronchiolitis obliterans, also called “popcorn worker’s lung” because it has been seen primarily in workers at microwave popcorn factories. This disease destroys the lungs and can be cured only by a lung transplant. Diacetyl appears to damage lungs when it is repeatedly inhaled in vaporized form; one case involved a consumer who ate two bags of extra-butter-flavored microwave popcorn daily for more than 10 years and reported that he habitually inhaled the buttery fumes as he opened the bags.

Most manufacturers have removed diaceytl from their products, but there are some allegations in news reports that the ingredient now used to provide the butter flavor is just another version of the same chemical. Government scientists have been quoted as saying that the new “diacetyl free” microwave popcorn poses the same danger as the old stuff. But here the greatest hazard is still to workers in the popcorn factories, not consumers. Diacetyl does its damage when inhaled, not when it is eaten.

The other safety issue has to do with the chemical PFOA (perfluorooctanoic acid, also known as C8), used in the lining of microwave popcorn bags. PFOA is also used to make Teflon and other stain-and stick-resistant materials including pizza boxes. In June 2005, a scientific advisory panel to the U.S. Environmental Protection Agency (EPA) identified PFOA as a “likely carcinogen” but drew no conclusions as to whether products made with it pose a cancer risk to humans. However, animal studies have identified four types of tumors in rats and mice exposed to PFOA.

In a 2009 agreement with the U.S. Environmental Protection Agency, eight U.S. companies, including DuPont, agreed to remove all PFOAs from their products (excluding Teflon) by 2015 and to reduce manufacturing emissions by 95 percent as of this year (2010). While scientific studies have not established a link between microwave popcorn bags and other products containing trace amounts of PFOA to increases in cancer in humans, the chemical has been shown to cause cancer and birth defects in animals, and it is so pervasive that it’s detectable in the blood of 95 percent of Americans.

To avoid the potential hazards of microwave popcorn, you can air-pop kernels and then flavor them, as I do, with a little tamari, some nutritional yeast, garlic powder and, sometimes, cayenne pepper. Or try it with chili powder, a little grated Parmesan cheese or dried dill. If you don’t use oil, mist the popcorn lightly with a little purified water before adding dry flavorings to help them stick.