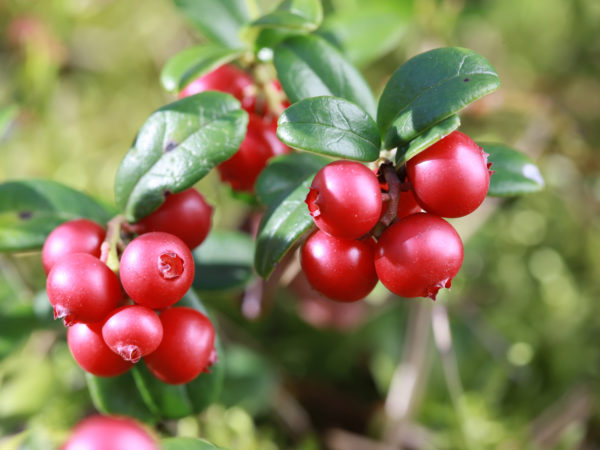 Lingonberries (Vaccinium vitis-idaea), are also called cowberries, alpine cranberries, and more than 20 other names. These little red berries are native to northern Europe, Japan and northern China. A subspecies with smaller berries – known as low-bush cranberries – grows in some parts of the northern United States, in Canada and in Greenland. Lingonberries have a tart taste and are used in making jam, juice and syrup. They can also be mashed in sugar and frozen, eaten at room temperature or used to make smoothies. They are relatives of cranberries, blueberries, huckleberries and bilberries.

Like cranberries and blueberries, lingonberries contain a substance that can help prevent urinary tract infections by interfering with the attachment of bacteria to the bladder wall. And like their better-known berry relatives, lingonberries are rich in antioxidants (polyphenols), which have well-studied health benefits.

While they are being actively marketed as superior to other berries, I haven’t seen any scientific evidence showing that they are any better for us than blueberries, which came out on top in a comparison of the antioxidant capacity of 40 different types of fruits and vegetables at the Jean Mayer USDA Human Nutrition Center on Aging at Tufts University. Blueberries are a healthy, low glycemic-index carbohydrate and a good source of vitamin C and fiber (two grams per one-half cup serving). They also provide ellagic acid, a compound which inhibits tumor growth in laboratory mice.

Lingonberries are being promoted online and elsewhere as a “new” superfruit. They are hardly new. Lingonberries have been eaten fresh, preserved and combined with other foods for generations in northern Europe. In folk medicine, they’ve long been used an antiseptic, a treatment for urinary tract infections, as an astringent, a disinfectant, and a treatment for diabetes, arthritis, gout and viral infections. Lingonberries have not been widely studied, however, and there is no good scientific evidence to verify claims that they can effectively treat all the conditions for which they (or preparations made from them) are recommended. We also have no objective way to determine the correct dosage of products made with lingonberries. I haven’t seen any evidence showing that lingonberries are any better than cranberries (or blueberries) for the prevention and treatment of urinary tract infections.

As I see it, the promotion of the various drinks, supplements and other products containing lingonberries or other less familiar berries touted as “superfruits” is marketing hype. You can get the same, or better, health benefits by eating organic blueberries, which are more readily available and less expensive.