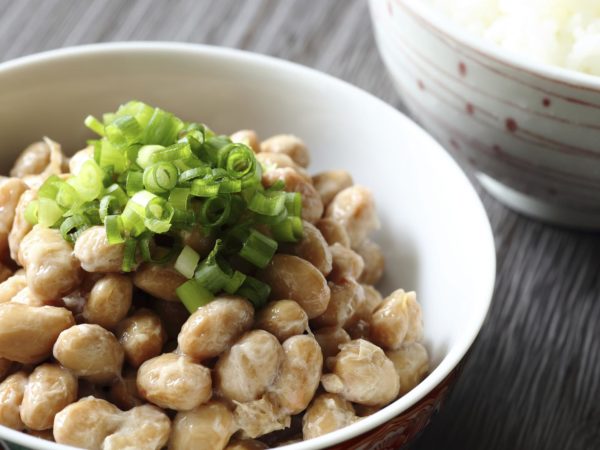 Natto is a fermented soy food with a distinctive, powerful smell that has been described as musky and similar in pungency to ripe cheese. It often comes wrapped in rice and seaweed. Natto has a strong, nutty and salty flavor and a slippery texture. In Japan, it is often eaten at breakfast with rice and, sometimes, with mustard, soy sauce, broth, vegetables or a raw egg. In that country you’ll also find natto sushi, natto toast and in some areas, natto dusted with sugar – even natto ice cream.

Because of its pungent odor, odd texture and assertive flavor, it’s a challenging food for most westerners (and some Japanese as well) to enjoy. Personally, I’ve come to like it occasionally, especially with sushi.

To make natto, soybeans are soaked overnight and then steamed for about an hour. Next they’re sprinkled with powdered natto bacteria (Bacillus subtilis) and allowed to ferment for up to 24 hours. It then must be cooled and aged for at least a week to allow its characteristic flavor and texture to develop.

The Japanese have long looked upon natto as a health food and a folk remedy for cardiovascular disease. Nutritionally, natto does have a lot to offer. A serving provides the same amount of protein as a similar amount of beef, but with fewer calories (a three ounce portion contains 15 grams of protein and 178 calories). Like other fermented soy foods, natto contains vitamin K, which we need for normal blood clotting and regulation of calcium in the body, keeping it in the bones and out of the arteries. Adequate vitamin K intake also appears to reduce the risks of both heart disease and cancer.

In addition, natto provides vitamin E and vitamin B2 and contains an enzyme called nattokinase, produced during the fermentation process, which is said to help prevent blood clots and which is being studied for it health benefits. Nattokinase supplements in capsule form are available and are promoted as an alternative to anti-coagulant drugs to prevent and dissolve blood clots and lower blood pressure. I do not recommend them, however, because we still don’t have adequate scientific evidence demonstrating the safety and effectiveness of nattokinase as an anticoagulant or tonic for the heart.

In the United States, natto is sold frozen in Asian markets, but it hasn’t caught on yet, even though Americans have enthusiastically adopted sushi, sashimi, saki, shiitake mushrooms and other Japanese foods.

I’ve read that one food company is trying to make natto more appealing by mixing it with olive oil and mayonnaise as a spread for bread, bagels and tortillas. I’m not sure that’s the way to go.