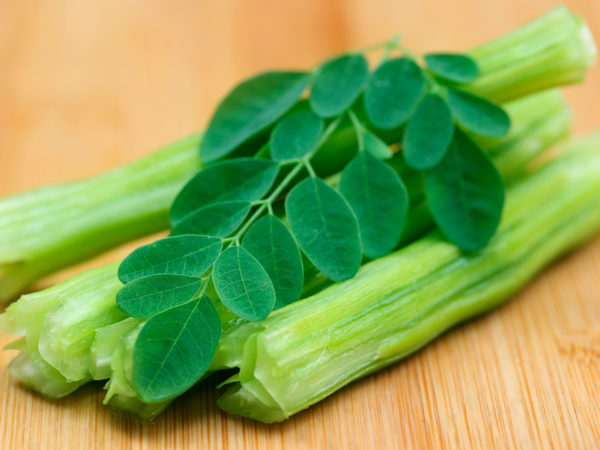 Moringa oleifera, also called the “drumstick tree” or “horseradish tree”, grows in West Africa, South America, south Asia and other parts of the tropics. Its leaves and seedpods contain digestible protein, calcium, iron, vitamin C and other antioxidants. I’ve read claims that ounce-for-ounce, moringa leaves have twice as much protein as yogurt, 4 times more calcium than milk and 7 times more vitamin C than oranges. The leaves and pods have anti-inflammatory, anti-diabetic, and possibly cancer-protective effects. The seeds are sometimes eaten green, roasted, or powdered and steeped for tea and used in curries.

Moringa is also reputed to provide medicinal benefits for some 300 disorders ranging from arthritis and asthma to heart problems, high blood pressure and all types of infections. In India, it also has a reputation as an aphrodisiac. While there’s little scientific evidence to back up many of the medicinal claims, one study did find that 3 grams of moringa taken twice a day for 3 weeks reduced asthma symptoms and the severity of asthma attacks in adults. Another suggested that a moringa supplement taken twice a day could increase breast milk production in new mothers.

Most importantly, moringa’s nutritional benefits could be life-saving in parts of the world plagued by malnutrition. Unfortunately, for many cultures moringa carries some stigma as a “poor person’s crop” to be eaten only in times of famine. That could change if researchers succeed in breeding what they call more “user-friendly” varieties that are easily cultivated on small plots of land, with leaves that taste less bitter.

Rather than being a sign of impoverishment, Moringa has acquired status as a superfood in the U.S., where you now can buy power bars and smoothies made with the leaves. It has even been touted as the “new kale.”

Instead of focusing on any superfood, however, I suggest aiming for variety in your diet, minimizing your consumption of processed and fast food and eating an abundance of fresh fruits and vegetables. You can help your body achieve optimum health by following an anti-inflammatory diet – it will give you ample vitamins, minerals, essential fatty acids, dietary fiber, and protective phytonutrients, without all the hype.