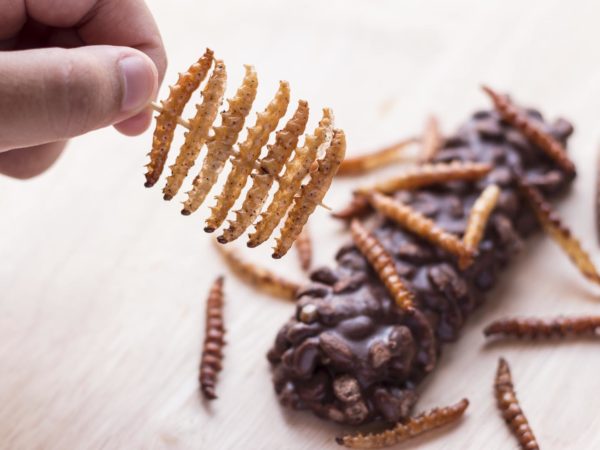 A great deal has been written lately about eating insects – a practice known as entomophagy – with recent interest probably stemming from a U.N. Food and Agriculture Organization (FAO) report suggesting that the practice would be good for human health and for the environment.

In fact, a fair amount of the world’s population already eats insects, and not necessarily out of desperation for food. In some countries, certain insects are regarded as delicacies and are artfully prepared. Toasted, spiced grasshoppers, called chapulines, are popular snacks sold in markets and at sporting events throughout Mexico, and deep-fried tarantulas are a special treat in Cambodia. Crispy-fried locusts and beetles are popular in Thailand along with more than 200 farmed species of insects, including crickets and larvae that are sold in Thai supermarkets as ingredients in prepackaged foods (including cookies, freeze-dried noodles, microwavable packets, as well as frozen and canned products), according to a CNN report.

The FAO estimates that insect-eating is practiced regularly by at least two billion people worldwide, and that more than 1,900 insect species have been documented in the scientific literature as edible, the majority in tropical countries. The most commonly eaten insect groups are beetles, caterpillars, bees, wasps, ants, grasshoppers, locusts, crickets, cicadas, leaf and plant hoppers, termites, dragonflies and flies, the FAO reports.

The FAO compares insects nutritionally to chicken, pork, beef and ocean fish in that they’re “rich in protein and good fats and high in calcium, iron and zinc.”  With an eye on the world’s burgeoning population, the FAO makes the point that raising insects for food would be good for the environment, resulting in considerably fewer greenhouse gases than those generated by most livestock. Because insects are cold-blooded, the FAO notes that they’re very efficient at converting feed into protein. Example: crickets need one-twelfth the feed of cattle, one-quarter the feed of sheep, and half the feed as pigs and broiler chickens to produce the same amount of protein.

Because of cultural taboos, eating insects is unlikely to catch on anytime soon in Europe and North America, although we unknowingly ingest bugs or bug parts every day. The FDA allows for maximum levels of “natural or unavoidable defects in foods for human use that present no health hazards.” If you check out the FDA’s “Defects Levels Handbook” online, you’ll find dozens of foods listed and see that chocolate can have 60 insect fragments per 100 grams and peanut butter, 30 insect parts for every 100 grams.

If entomophagy still seems odd to you, consider that most of us consider shrimp, lobster and crab delicacies, though they are similar to insects in both form and – some say – flavor. In short, this is yet another area in which Europe and North America could learn a great deal from a serious study of Asian, African and Latin American food cultures.