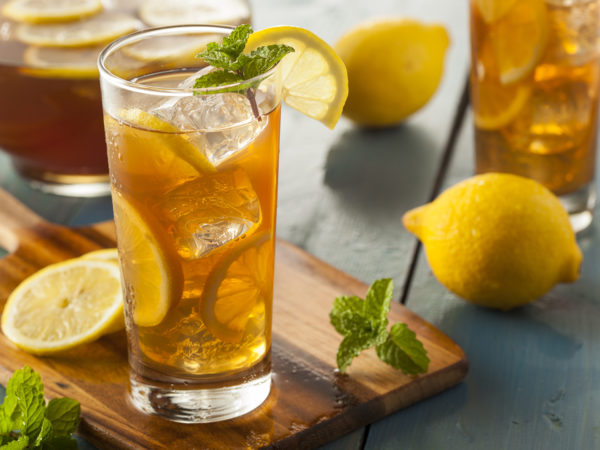 Iced tea is an American phenomenon – in fact, 75 percent of the tea consumed in the United States is iced. The drink is said to have been introduced in 1904 at the St. Louis World’s Fair during a heat wave, but recipes for it were published earlier. I’ve read that the popularity of iced tea is beginning to spread outside the U.S., but worldwide most people still drink their tea hot.

In general, fresh brewed hot tea is healthier than iced tea, but you can get the health benefits of tea from iced tea if you use good quality tea and prepare it properly. I checked on this issue with Iman Hakim, M.B.B.Ch., Ph.D., M.P.H., of the University of Arizona’s College of Public Health, who is an authority on the health benefits of tea. Dr. Hakim told me that hot, brewed tea is highest in polyphenols, the antioxidants responsible for the health protective effects of tea.

To get the same benefits from iced tea, Dr. Hakim recommends chilling brewed hot tea in the refrigerator – cooling doesn’t diminish the availability of the polyphenols. However, this changes if ice is added: Dr. Hakim says that then the caffeine will combine with the polyphenols to form an insoluble complex, which is not as bioavailable.

There are many methods of preparing iced tea, and not all of them lend themselves to retention of tea’s health benefits. Iced tea is often made with more water and fewer tea bags than is the case when hot tea is brewed (usually one bag per cup of hot water). “Sun tea” is made by steeping tea bags in water for several hours in a glass container placed in the sun but here, too, the amount of water and number of tea bags used can vary substantially. Depending on the preparation method, the concentration of flavonoids (a class of antioxidants found in tea) can vary from 202 to 847 micrograms per milliliter of tea, according to one of Dr. Hakim’s studies.