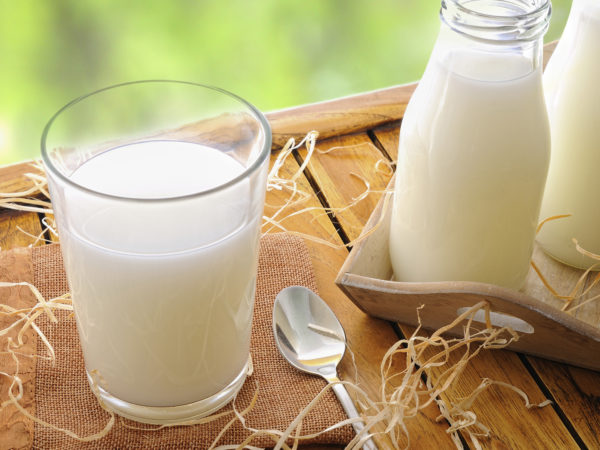 Drinking goat’s or sheep’s milk is generally healthy and may be suitable for those who can’t tolerate (or should not consume) cow’s milk, which contains a form of casein (protein) that can aggravate the immune system. However, if you’re lactose intolerant, you may have the same trouble with them. Goat’s milk contains a little less lactose – about nine grams per cup compared to 12 grams in cow’s milk, and has a different form of casein. If you have digestive problems with lactose but want to try goat’s milk, the American Dietetic Association advises sampling a small serving with meals to see if you can tolerate it.

In general, however, if you are lactose intolerant or are actually allergic to milk, you may have to avoid all animal milk. A study from Spain published in 2012 found that 26 percent of children who were allergic to cow’s milk were also allergic to goat and sheep milk. The investigators warned that kids who are allergic to cow’s milk should be tested to see if they also react to other animal milk in order to minimize the chances of a life-threatening accidental intake. They noted that treatment to reduce the severity of cow’s milk allergy won’t necessarily help kids allergic to goat and sheep milk. (Please note that feeding raw goat’s milk to infants can lead to life-threatening illness.)

Some animal research published in 2007 suggests that goat’s milk may be nutritionally superior to cow’s milk. A study from the University of Granada in Spain found that it may help prevent iron-deficiency anemia and softening of the bones as well as foster better digestive and metabolic use of iron, calcium, phosphorus and magnesium. This study was done in rats, and the findings must be confirmed in human studies.

Sheep’s milk tastes slightly sweet and contains up to twice as much calcium, phosphorus, zinc and B vitamins as cow’s or goat’s milk. It is sold both fresh and frozen. Since it contains about the same amount of lactose as cow’s milk, it isn’t a great alternative if you’re lactose intolerant. However, even people who are severely lactose intolerant should be able to tolerate sheep’s milk yogurt since the lactose it contains will have been converted into lactic acid. And with sheep’s milk cheeses, much of the lactose goes out with the whey in the cheese making process.

The vast majority of sheep’s milk produced worldwide is made into cheese, (including feta, ricotta, Pecorino Romano, Manchego, and Roquefort), and some is made into yogurt and ice cream. Since sheep produce less milk than cows and goats, their milk tends to be more expensive. It also can be harder to find. I’ve read that it is available in some gourmet specialty stores in New York. If you can’t find quality sheep milk locally, you may be able to order it frozen via producers’ websites.

Also, note that I do not recommend low- or non-fat versions of any kind of dairy products. I believe the healthier choice is organic, high-quality, full-fat version.