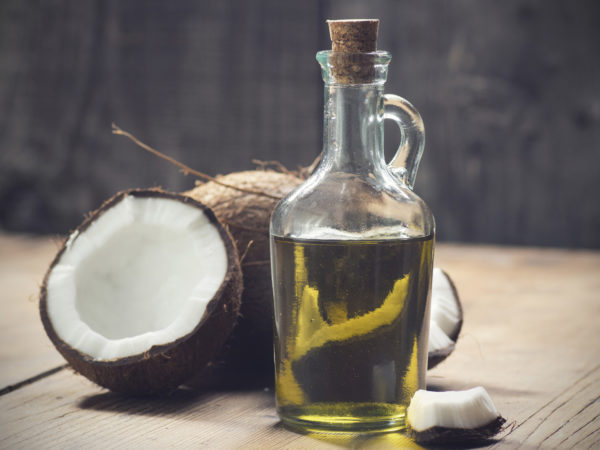 Coconut oil is one of the few saturated fats that doesn’t come from animals, but like other saturated fats can raise cholesterol levels and, therefore, should play only a very limited role, if any, in your diet. In the past, it was widely used in movie popcorn, candy bars and commercial baked goods but was phased out of many of them because of consumer opposition to unhealthy tropical oils.

Now coconut oil is being promoted as a weight loss aid; it is also touted in a book by a naturopathic doctor. The rationale goes something like this: as a source of medium-chain triglycerides (MCT), coconut oil isn’t stored in the body as fat as readily as oils composed of long-chain triglycerides (LCT). Some research from McGill University in Canada suggests that this is true; MCTs also boost metabolism and satiety, and therefore may promote weight loss when they replace LCTs in the diet. Because they are so easily digested, MCTs are given in hospitals to provide nourishment for critically ill people who have trouble digesting fat.

Promoters also note that coconut oil is high in lauric acid and contains trace amounts of caprylic acid, both of which appear to have antiviral and antifungal properties, and support immune function. Lauric acid is actually present in breast milk; infants convert it to a substance called monolaurin that protects them from infections. These two fatty acids and their effects on health are being studied, but for now, we don’t have any evidence suggesting that coconut oil is better for you than other saturated fats. The benefits of coconut oil in the diet, if any, are likely to be minimal, and until we have more and better evidence about coconut oil’s effect of metabolism and potential role in promoting weight loss, I do not recommend using it.