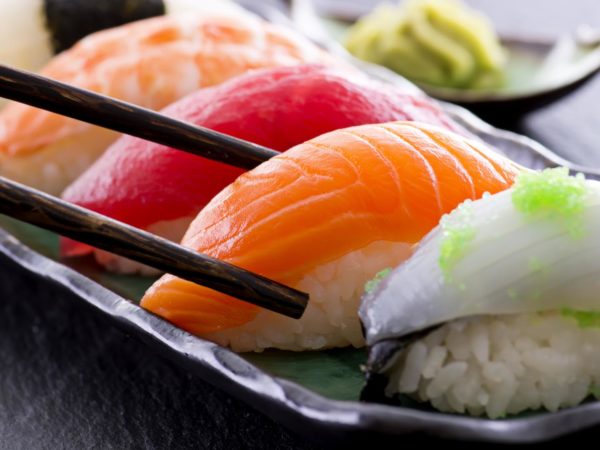 During the past few decades, sushi has become increasingly popular in North America. Some people are still concerned by potential health problems from eating raw fish, but, overall, sushi has proved to be quite safe. The last notable scare was in Bentonville, Arkansas, in 2006, when 123 people became sick after eating at a local sushi restaurant. Health officials confirmed 30 cases of salmonellosis.

For safety’s sake, the FDA requires that fish to be served raw remain frozen for seven days at a temperature of minus four degrees Fahrenheit (or for 15 hours at a temperature of minus 31 degrees Fahrenheit in a blast freezer). Freezing kills any parasitic worms and their larvae that may infect some species of fish (including salmon, herring, and cod) and that can make you pretty sick. Symptoms of an infection depend on the type of worm, ranging from nausea, cramps, and diarrhea to severe abdominal inflammation and pain that can develop within an hour after eating. Surgery may be necessary to remove one of these parasites, the roundworm Anisakis simplex.

If you make your own sushi at home, don’t use raw fish that hasn’t been adequately frozen. Note that home freezers usually can’t produce low enough temperatures. When you buy fish to make sushi at home, be sure to choose only “sushi grade” or “sashimi grade,” terms which indicate that the fish has been commercially frozen according to FDA regulations. There are some exceptions to the freezing rule: certain species of tuna, including yellowfin don’t need to be deep frozen, but I advise against eating tuna, as well as bluefish, swordfish, king mackerel, tile fish and marlin in any form because of the high levels of mercury they contain. This is especially important if you’re pregnant or planning to become pregnant. To find a list of the types of sushi considered safe to eat during pregnancy visit the Natural Resources Defense Council’s Web site. In addition, anyone with compromised immunity (including young children, the elderly and anyone with a chronic illness) should avoid sushi made with raw seafood.