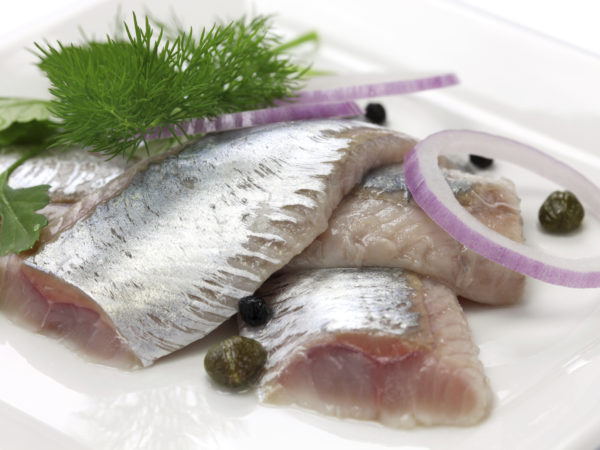 There’s not a big difference between sardines and herring. In fact, “sardine” means “small fish.” (The fish in question were named after Sardinia, the second largest island in the Mediterranean, because they used to be plentiful in this region.) When they’re young and small, these fish are called sardines. When they get older and bigger, they’re called herring. For centuries, herring have been a dietary staple of northern Europeans – Scandinavians, Russians, Dutch, British and Germans.

Both herring and sardines are very good for us because they provide high levels of heart-healthy omega-3 fatty acids, essential fats that also play an important role in normal brain development and function. Research indicates omega-3s down-regulate inflammation, and may help reduce the risk and symptoms of a variety of disorders influenced by inflammation, including heart attack, stroke, cancer, and autoimmune diseases such as rheumatoid arthritis. People with high cholesterol, diabetes, symptoms of PMS, coronary artery disease, breast cancer, memory loss, depression, attention deficit hyperactivity disorder, insulin resistance, and arthritis may also benefit from the omega-3 fatty acids found in fish oil.

Another plus: because they’re relatively small and near the bottom of the food chain, herring and sardines don’t  accumulate the contaminants that are so common in large, predatory fish. Furthermore, these fish haven’t been endangered by overfishing as some other species of fish have, so you can eat them with a clear environmental conscience. In fact, since predatory species have been vastly overfished, we have twice as many sardines today as we had 100 years go.

Herring can grow to about 1.5 feet long. They are cold water fish plentiful in the northern Atlantic and the Pacific Oceans. Pacific herring have been reported to live up to 19 years and can inhabit fresh as well as salt water.

I’ve written about sardines in this space before and celebrated the increasing availability of fresh ones that are delicious when grilled. If you’re unfamiliar with sardines, try my recipe for sardine sandwich spread, an easy to prepare and delicious lunch.

Fresh herring is higher in omega-3s than herring sold any other way, but you seldom see it. (I’ve eaten it grilled in Japan and love it that way.) You’ll get the same health benefits by eating fresh sardines. However, you can get (and safely eat) herring raw (it’s used in sushi), smoked or pickled and flavored many different ways. Your choice depends upon your taste, but I urge you to try different varieties until you discover one that appeals to you. In addition to its health benefits, herring often comes as a meal ready to be served. One of my favorites is kippered (smoked) herring; look for it in cans in any supermarket and eat it with lemon, mustard, and onion.